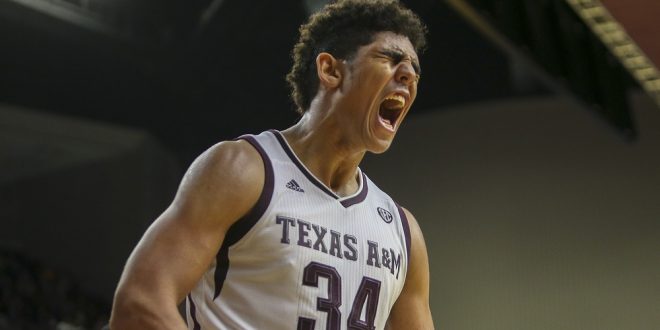 Preview: Texas A&M Looks for First SEC Win of the Season at Tennessee

Prior to Saturday’s game, the Aggies started the season ranked 25th on the preseason AP Poll and made their way to the fifth spot in week 8 of the regular season AP Poll (Dec. 25).

Starting the season 11-1, Texas A&M has since lost all four of its conference games and are now unranked.

The Aggies’ last two games were both one-point losses to a talented LSU team and to Kentucky at Rupp Arena.

Texas A&M has been short-handed due to suspensions and injuries of multiple starters during this mid-season stretch:

Coach Billy Kennedy says that the team chemistry in terms of availability has been the hardest thing to deal with; especially in the game of basketball. “You take three main cogs out of your starting five, that’s like having a whole different team.”

On a positive note, Saturday’s matchup will be the second game in which at least four of five starters have played together since playing Northen Kentucky on December 19th.

The Volunteers Are Quietly Making Noise

Let’s look past the fact that the Volunteers have beat #16 Purdue and #14 Kentucky. Word around the SEC is that dealing with Admiral Schofield and Grant Williams are two handfuls to deal with. Paired with sharpshooter Jordan Bowden, teams no longer look forward to seeing Tennessee on their schedule.

Schofield and Williams (6-foot-5 and 6-foot-7 respectively) are undersized forwards at this level of competition but does not keep them from playing aggressively against other big men.

Coach Barnes says Schofield and Williams seek out contact due to their lack of height and abundance of strength. Seeking out contact is “their make-up both mentally and physically.”

Back to the crib.

Tennessee Looks to Compete for SEC Title in 2018

With wins against Kentucky and Purdue and a five-point loss to North Carolina, Coach Rick Barnes believes the SEC is the best conference in the country and that his team can compete with the best of the best.

The Volunteers already have as many wins (11) at this point of the season as they had home wins last season and aren’t looking to slow down anytime soon.