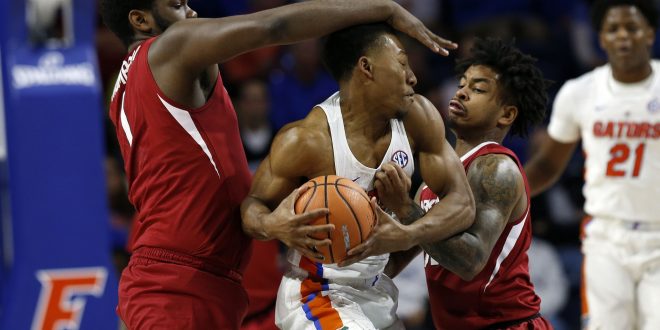 KeVaughn Allen finished with a season-high 28 points as the Gators cruised to an 88-73 victory over the Arkansas Razorbacks on Wednesday night. Jalen Hudson finished one board short of a double-double, ending the game with 21 points and 9 rebounds. Egor Koulechov was efficient as well, notching 12 points and 8 rebounds in 35 minutes played.

Florida shot 13-25 (52%) from beyond the arc and 48.3% from the field. The Gators outrebounded Arkansas, 40-36, and recorded 14 assists on 28 made shots. Jaylen Barford led the Razorbacks with 28 points on 10-15 shooting from the field. The Hogs struggled severely from the free throw line, sinking only 6 of 15 attempts at the charity stripe. Defensively, Kevarrius Hayes and KeVaughn Allen had 3 and 2 blocks respectively, while Chris Chiozza led the team with 3 steals. The Gators have not lost to the Razorbacks in Gainesville since 1995.

KeVaughn Allen looked like KeVaughn Allen tongiht. Goes for 28 as Florida beats Arkansas by 15. Will the Razorbacks ever be able to win on the road?

Florida will have two days off before taking on the Kentucky Wildcats at Rupp Arena on Saturday. Kentucky is coming off of a tough 76-68 road loss to the South Carolina Gamecocks on Tuesday night.

Previous Preview: Missouri Looks to Even Series Against Tennessee
Next Confidence is Key for KeVaughn Allen