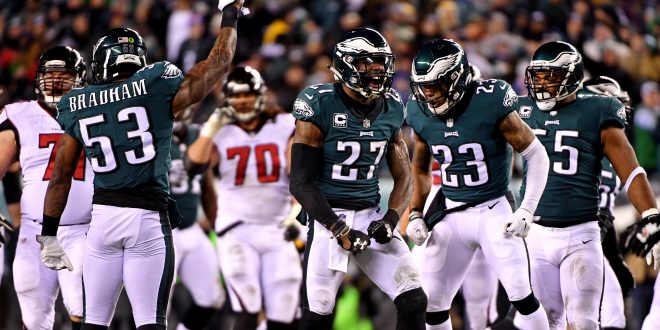 It’s been 13 years since the Philadelphia Eagles’ last visit to the Super Bowl. Actually, throughout the 53 years of the competition’s existence, the Eagles have only been twice. Both ended in a loss.

This year the Eagles have a chance to finally return to football’s biggest stage. However, first, they have to take on the Minnesota Vikings in the NFC Championship Game.

How The Eagles Got Here

This season, the Eagles (13-3) enjoyed their best season since the 2004 season – that same season of their last Super Bowl appearance. In fact, their 13-3 record is now tied for a franchise-best record. The Eagles also tied for the best record of the season (along with the New England Patriots, Pittsburgh Steelers, and Minnesota Vikings).

Philadelphia clinched the top seed in the NFC, winning the NFC East, and earning home-field advantage throughout the playoffs. The Eagles looked like the team to beat until December 10th, when quarterback, team leader, and MVP candidate Carson Wentz suffered a season-ending ACL tear in his left knee.

All of a sudden, the Eagles became the underdog in the playoffs at home, hosting last year’s NFC champion, the Atlanta Falcons. Despite the odds, they beat Atlanta last weekend 15-10, stopping them at the 2-yard line on the Falcons final possession. The defense held 2016 MVP Matt Ryan to 1 touchdown pass and 10 points.

The Eagles have another shot at reaching their third Super Bowl in franchise history. But first, they need to take down the Minnesota Vikings who are hoping to become the first team to play a Super Bowl in their home stadium.

Philadelphia comes into this matchup as the underdogs once again. However, they can play spoiler to Minnesota’s dream. In order to reach the Super Bowl, Philadelphia needs to rely on what got them past the Falcons – their running game and defensive line.

Interestingly, both teams are playing with a different quarterback than from the start of the season. Philadelphia is relying on Nick Foles after Wentz’ injury. Case Keenum took the position from Sam Bradford for the Vikings. The outcome of this match depends on how Philadelphia’s defensive line pressures Case Keenum, and how the Eagles run the ball and prevent any mistakes from Foles.

This season, Keenum has been one of the most pressured quarterbacks in the NFL with a rate of pressure at 39.3 percent. If Philadelphia can pressure Keenum and make him uncomfortable, then they can force mistakes and difficult throws. But if they leave him with a clean pocket, Keenum and the Vikings could take this game.

On Philadelphia’s offense, their best bet is to control the clock by running the ball. Their offensive strength is based on the running game through Jay Ajayi, LeGarrette Blount, and Corey Clement. And if they minimize risk on Foles and the throwing game, then they could be going to their third Super Bowl.

The Philadelphia Eagles will host the Minnesota Vikings at Lincoln Financial Field this Sunday, January 21. The game is set for kick-off at 6:40 p.m. and will be broadcast on Fox.

The winner will be on their way to Super Bowl LIII and take on the winner between the Jacksonville Jaguars and the New England Patriots.