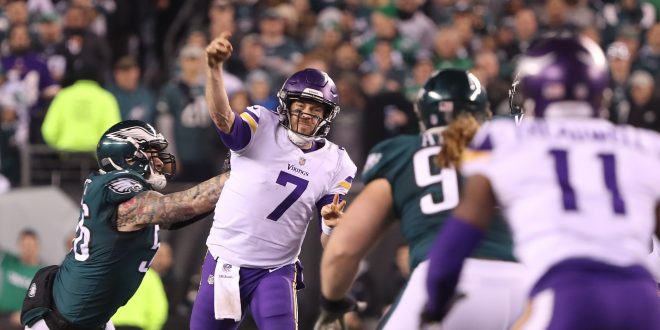 Flashback to Sunday morning: The Minnesota Vikings, kings of the NFC North, on their way to the NFC Conference Championship against the Philadelphia Eagles. Never winning a Super Bowl, a lot was riding on this win.

Flash forward to now: The Vikings are done. Season ended. Super Bowl victory dreams put to rest until next year. A crushing 38-7 loss to the Philadelphia Eagles.

But what’s interesting about the Sunday night game is that the Vikings have been to a total of 9 conference final appearances (not counting the NFL Championship before the merger) and been to the Super Bowl 4 times. However, the Vikings have lost the last 6 NFC title games they have been in. As if this consecutive misery isn’t enough for you, the Vikings hold the top spot for NFL teams with closest approaches to the Super Bowl without actually winning it. Ouch.

But no point in dwelling on the past, right? A look to what next season might hold for this team could be good.

What’s Happening with the Quarterback Situation?

Vikings quarterback Case Keenum is a “middle-of-the-road” type of quarterback. In Sunday night’s championship game, he had 271 yards, one touchdown and two interceptions. But Keenum has a cool story to his rise to starting QB. He was originally a backup for Sam Bradford until he had issues with his knee.

Even with the major success this year, they may give Teddy Bridgewater preference, as he will be back and healthy at the start of next season. The Vikings want a Super Bowl, and if Keenum can’t lead them to that, they will look elsewhere.

Pat Shurmur is Out, So Who’s In?

Vikings offensive coordinator Pat Shurmur is saying goodbye to the team and saying hello to a possible head coaching job with the Giants. Shurmur was moved up to OC after Norv Turner’s resignation in November 2016. This season brought him a ton of success and made him a highly sought-after coach.

This leaves the question of, who will be the new offensive coordinator? There hasn’t been any rumors of who it could be, but some big names are being thrown into the mix.

One notable name for Vikings fans would be ex-offensive coordinator for the team Darrell Bevell, who is available but is rumored to be the Atlanta Falcons new QB coach.

The Vikings probably won’t be announcing anything too soon, but instead recovering from the misery of losing another shot at the Super Bowl.