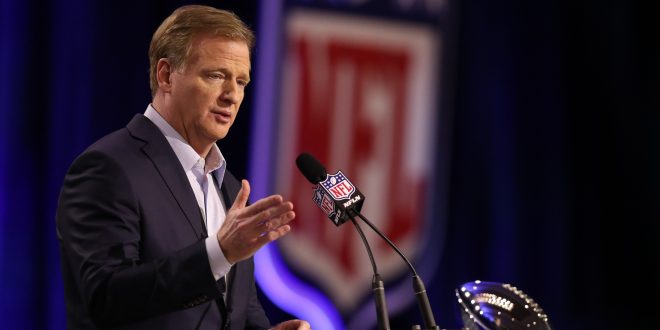 NFL commissioner Roger Goodell gave his annual state of the league address Wednesday afternoon in Minneapolis. After a season dominated by politics and poor headlines, having nothing to do with sports, Goodell made it seem as if all has returned to normal.

Goodell talked about controversies in the leauge, involving the overuse of replay, NFL’s international growth, ineffective catch/no-catch rule and the XFL proposal. Colin Kaepernick was of course part of the discussions as well, which gave many fans the opportunity to give thoughts on Twitter.

Very good perspective on standing up and doing the right thing https://t.co/C76U4oqZkA

However, with all the controversy revolving around Kaepernick and many fans unhappy with him not on an active roster, the commissioner kept the topic short. All the clubs must individually make their own decision on Kaepernick, explained Goodell.

Starting Over With The Catch Rule

Due to the complexity of the catch/no-catch rule, Goodell expressed wanting to completely start from scratch. Adding and subtracting from the current rule would not be as proficient.

The main part of the rule to focus on will be going to the ground while making a catch to maintain possession of the football while on the turf.

This is also known as the “Calvin Johnson Rule”, which has been highly scrutinized in recent years. This rule became crucial when determining the outcome of the New England Patriots versus the Pittsburgh Steelers game in December.

Furthermore, Commissioner Goodell talked about the NFL wanting to build a stronger relationship with Mexico City. This was in response to the league announcing that in 2018 the Kansas City Chiefs and the Los Angeles Rams will play there – the host team being the Rams.

This led to Goodell being asked if other sites within Mexico would be considered, such as Monterrey and Guadalajara.

“The league may consider it in the future, but for now we have such a good situation in Mexico City”, Goodell said.

There have been several proposals sent to the commissioner and the league about various forms of spring football. Goodell expressed that they haven’t focused on the XFL proposal quite yet. The league is mostly concerned with its game long-term, which Goodell said they will wait to see if the NFL is asked to be involved.

This will be Roger Goodell’s 12th Super Bowl as NFL Commissioner.

Super Bowl 52 will take place February 3rd at 6:30 pm as the Patriots face the Eagles.