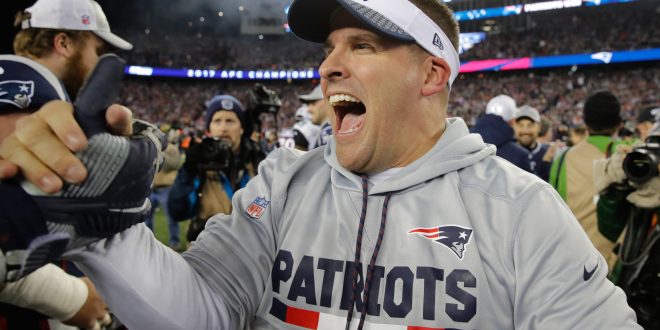 If you blinked too fast, you may have missed Josh McDaniels’ last-second withdrawal from the Indianapolis Colts head coach position on Tuesday. The NFL world is still in shock and is looking for answers regarding the sudden change of heart.

Speculation around the league implies that Patriots owner Robert Kraft lured McDaniels back to Foxborough by increasing his pay.

In the past 48 hours, Patriots owner Robert Kraft began talking with Josh McDaniels and ultimately wound up sweetening his contract, helping to entice him to remain in New England, per sources. Bill Belichick has his OC back.

Money isn’t the only thing that kept McDaniels’ from the Colts (especially when considering head coach salaries today). According to ESPN’s Patriots beat writer, Mike Reiss, what really got McDaniels to stay was Bill Belichick.

Belichick told McDaniels that he’d be more involved with him in regards to “inner workings” of the team.  These include roster construction, salary cap management, et cetera, which was extremely valuable in McDaniels’ decision to stay.

Giving McDaniels a broader role within the organization could be part of a succession plan for Coach Belichick, according to Reiss. Belichick is now 65 years old and has coached the Patriots for 18 seasons at the conclusion of the 2017 NFL season.

Another contribution to the Patriots’ proposition was a long-term contract extension; allowing his children to stay in the same school system for an extended time period.

Maybe it was the money for McDaniels, or more control within the organization. It could even be the fact the he would miss parking his car at the Harvard yard or buying Hoodsie Cups for the kids. At the end of the day, he’s still a Patriot.

“The rivalry is back on” is what Indianapolis Colts General Manager Chris Ballard said to close his interview on Wednesday.

McDaniels’ withdrawal shocked the Colts Organization. McDaniels had gone as far as verbally accepting the job and telling assistant coaches they had a job on his staff.

Haven’t read the article but I can tell you there is NO excuse big enough to justify this. It’s one thing to go back on your word to an organization. But having assistant coaches leave jobs to go with you then leave them out to dry is indefensible. For COMFORT?? https://t.co/hlsYviDC9l

The tone in Ballard’s voice said it all for the city of Indianapolis. “He chose not to be an Indianapolis Colt. That’s okay. We’ll move forward.”

Looking ahead, Ballard and the Colts are back on the hunt for a head coach and are moving past the McDaniels situation.

“We want, as an organization, a head coach that wants to be all in. We got work to do. I want someone that’s 100% committed to partnering with us and getting that work done.”