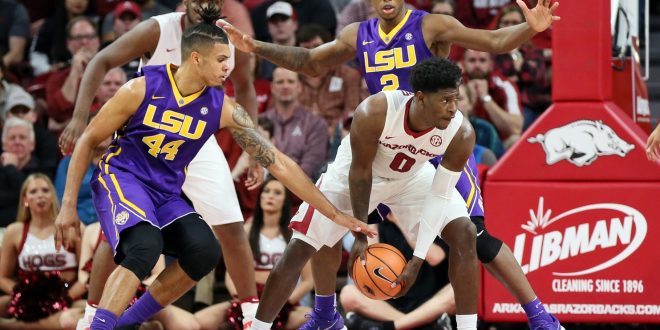 The LSU Tigers and the Alabama Crimson Tide face off tonight in Tuscaloosa. This will be the second meeting between the two teams this season.

The Tide traveled to Baton Rouge in January. Alabama came away with a win, beating LSU by a score of 74-66.

Alabama hits the court Tuesday night after earning a win over the weekend. The Tide beat the then 15th-ranked Tennessee on Saturday. The final score was 78-50. This win was record-breaking; it was the largest (28-point) win over an AP Top 15 team in history.  The Tide have beat five AP Top 25 teams this season. Alabama is currently the top-ranked defense in the SEC.

Players to watch for the Crimson Tide include freshman Collin Sexton. Sexton leads the team scoring an average of 18.5 points per game. Sophomore Dazon Ingram is a key defensive player to watch. Ingram averages 5.3 defensive rebounds per game, ranking second in the conference. Lastly, Junior Donta Hall leads the team with a .742 (112/151) field goal percentage.

The Tigers are coming off a huge win against Ole Miss over the weekend. LSU beat 15th-ranked Ole Miss by a large margin. The final score was 82-66.

Players to watch for LSU include freshman Tremont Waters. Waters leads the league in steals per game (2.1) and assists (6.0). He leads the Tigers in points per game, averaging 14.9. He earned SEC Freshman of the Week honors just over a month ago. Sophomore Skylar Mays and senior Duop Reath are also standouts on the roster.

Born and raised at the ballpark! Typically quiet- until it comes to sports. I'm a South Florida native with a passion for baseball nearly as strong as my faith. Grew up in garnet + gold, turned out sporting orange + blue. Likely to be found with a camera. And yes, I take food pictures.
@victoriarossman
Previous SEC Game Rematch Preview : Mizzou and Texas A&M
Next SEC Preview: No. 18 Vols take South Carolina