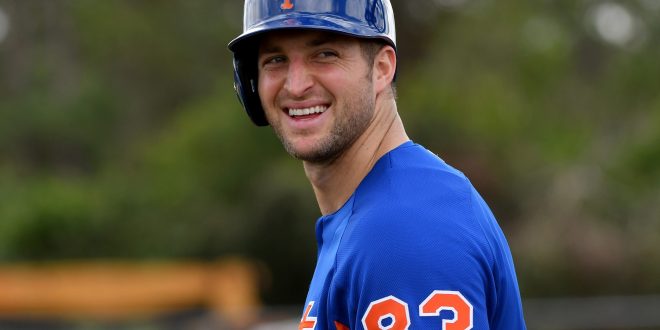 Tebow was last signed by the New York Mets on September 8, 2016.

Tim Tebow Invited to Spring Training with the NY Mets

Gator legend Tim Tebow is invited to spring training by the New York Mets for the second straight year. Mets general manager Sandy Alderson says he could see Tebow in the MLB one day.

Tebow’s 2017 Season in the Minor League

Tebow was last signed by the New York Mets on September 8, 2016. He then spent the 2017 season with the St. Lucie Mets of the Class A Advanced Florida State League and the Columbia Fireflies of the Class A South Atlantic League.

Tebow has played in 126 games between both teams and has a .226 batting average with eight home runs and 52 RBIs. He was able to raise his average above .300 in July but went 3-for-44 in August; he also finished the season with 10 errors.

Tebow says he believes he can make it to the big league if he puts in the work.

He says he has made many adjustments to adapt to his baseball career.

While Mets general manager see’s potential in him, Tebow is focusing on the here and now.

Tebow says he needs to take this time to focus as an athlete and not let making the Big Leagues affect him too much.

For now, Tebow is one of the 15 non-roster invitees who will work in the Mets’ big league camp over the next six weeks.