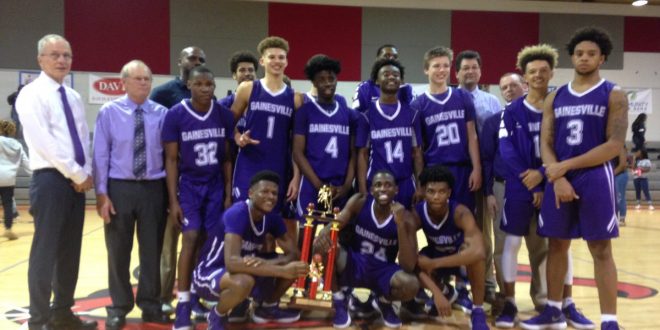 The Gainesville varsity boy’s basketball team will host St. Augustine for a Regional Quarterfinal tonight. The playoff game is part of the 2018 FHSAA Boys Basketball – Class 7A tournament. The game is set to start at 7 p.m.

The Hurricanes are District Champions with a district record of 8-0 this season. They are currently 22-5 overall with 9-2  record at home and 8-1 away. They head into their game against the Yellow Jackets with an 81-51 win over Columbia last week.

Gainesville’s goal every year is to make it to Lakeland, according to Head Coach Kelly Beckham.

The Hurricanes have been playing their best defense the past three games, hoping to keep their winning streak alive.

Coach Kelly Beckham talks about the magnitude of where the team is at in the season.

The Yellow Jackets are coming off a tough loss to Englewood, 48-63. St. Augustine currently holds a district record of 5-3 and a season record of 8-13.

This is the third consecutive season St. Augustine has reached the playoffs, but this is their first chance at a victory since 2009.