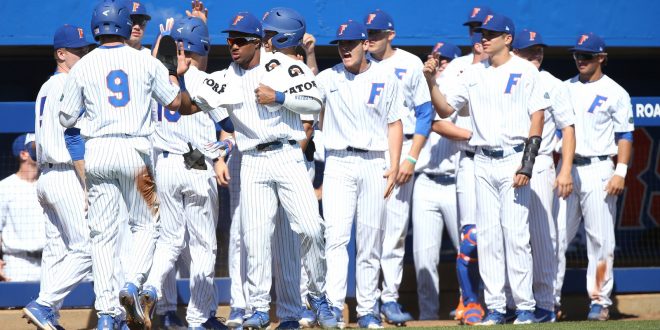 Tuesday night will mark the first of three match-ups that the Gators have against Florida State this season.

No. 2 Florida bounced back from a pair of losses to UCF with a sweep of Rhode Island over the weekend.

Recent History is on Florida’s Side

The Gators have enjoyed a lot of success in the series ever since coach Kevin O’Sullivan has been in Gainesville.

The head coach is 22-16 against the Noles all-time. Last season, Florida defeated Florida State all three times they played. McKethan stadium has not been nice to the Seminoles as the Gators are 61-48 all-time in their friendly confines.

Welcome To The Rivalry

O’Sullivan has put a lot of faith into his freshman’s arms so far this season and Tuesday will not be any different.

Freshman Jordan Butler will be on the bump for the Gators. The left-hander is 1-1 with a 2.50 ERA so far this season. In his last start against UCF, Butler completed five innings, giving up two runs. The Freshman will be going up against Andrew Karp who is sporting a spotless 3-0 record with a 1.56 ERA.

Like the Gators, the Seminoles are off to a great start to begin the season, maybe even better.

Florida State has started off the 2018 campaign with a 14-2 overall record. Those two losses came this past weekend against Wake Forest as the Noles lost their first conference weekend series.

Florida State has been nothing short of dominant so far, they began the season with a 14 game winning streak, the 4th longest in school history. Head Coach Mike Martin is 18 wins away from becoming the winningest coach in NCAA baseball history.

Jordan Butler’s first pitch from McKethan Stadium will be at 6 p.m. A live broadcast can be heard on ESPN 98.1 FM & 850 AM WRUF. A live stream of the game will be on the Watch ESPN app.