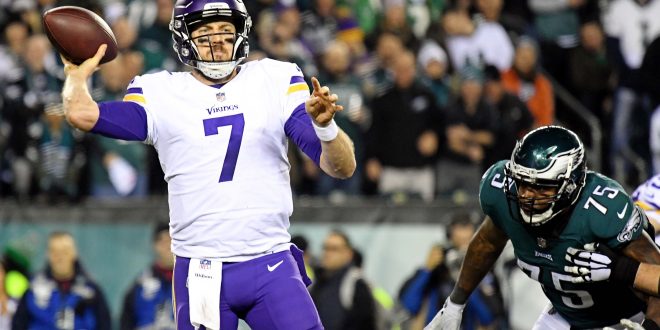 QB Case Keenum has reportedly agreed to a deal with the Denver Broncos. Keenum led the Minnesota Vikings to the NFC Championship this past season. The Broncos had a record of just 5-11 last season.

Case Keenum contract expected to be short term. It does not appear Broncos made serious run at Kirk Cousins. Keenum was target when negotiating window opened this morning. #9sports

Sam Bradford to the Cardinals

QB Sam Bradford intends to sign with Arizona with a 1-year $20 million contract. $15 million is guaranteed. There is an option for another year at $20 million.

Kirk Cousins to the Vikings

Kirk Cousins is expected to sign with the Minnesota Vikings. A three-year deal with a guaranteed $86 million is in the works.

Sammy Watkins to the Chiefs

Danny Amendola to the Dolphins

Danny Amendola is expected to sign with the Miami Dolphins. The deal is reportedly for two years and is worth $12 million, with $8.25 guaranteed.

Allen Robinson to the Bears

Reports say Allen Robinson intends to sign with the Chicago Bears. Robinson was a second-round pick in 2014 by the Jacksonville Jaguars. He tore his ACL in the 2017 season opener.

Drew Brees has agreed to a deal to keep him in New Orleans. Brees and the Saints have agreed to a two-year, $50 million deal.

Breaking: Drew Brees and the Saints are in agreement on a two-year, $50M deal. (First reported by NFL Network, confirmed by ESPN) pic.twitter.com/aglcZhBvq4

Born and raised at the ballpark! Typically quiet- until it comes to sports. I'm a South Florida native with a passion for baseball nearly as strong as my faith. Grew up in garnet + gold, turned out sporting orange + blue. Likely to be found with a camera. And yes, I take food pictures.
@victoriarossman
Previous South Carolina’s Road To Back-To-Back Titles
Next Jake Arrieta is a Phillie, Lance Lynn is a Twin