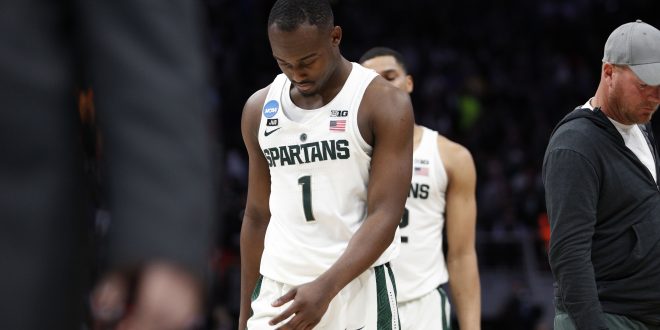 Michigan State Upset in Second Round

In a wild and unpredictable NCAA Tournament, the Michigan State Spartans became the latest upset victim on Sunday. The No. 11 seed Syracuse Orange (23-13) eliminated the No. 3 seed Spartans (30-5), 55-53, in the second round at Little Caesars Arena in Detroit, Michigan.

Spartans’ head coach Tom Izzo says he loves his players, and fans should put all the blame on him for the loss.

Syracuse’s vaunted 2-3 zone defense flustered the Spartans. The Spartans shot just 25.8 percent for the game. Rather than moving the ball, getting into the lane and collapsing the zone to get easier shots, the Spartans stagnated and tried to shoot over the zone. Michigan State attempted a whopping 37 three-pointers, making only eight (21.6 percent). Most startling was the fact that the Spartans exploited the zone for 29 offensive rebounds but could only muster 21 second chance points.

Syracuse didn’t light it up either, only shooting 35.7 percent, including just 1-8 from deep. The Orange’s ability to get to the free throw line and convert was their difference maker offensively. Syracuse shot 24-31 from the stripe, while Michigan State was just 11-16.

Syracuse’s preferred slow, methodical, grind-it-out tempo prevailed. The teams slogged around in the half, with each team enduring a lengthy scoring drought. After jumping out to a 7-2 lead at the 16:48 mark, the Spartans went more than six minutes without a field goal. The Orange capitalized to take a 14-12 lead with 8:37 to go.

Then, Syracuse went on a near six minute field goal drought of its own. Michigan State took a 20-15 lead. The Orange responded back with a 7-2 run and appeared poised to take a 22-all tie into the locker room. However, Michigan State took the lead on the type of shot that only goes down in March Madness. Spartans’ junior guard Matt McQuaid had his three point attempt blocked by the Orange’s redshirt freshman forward Matthew Moyer. The rebound came right back to McQuaid, who fired an off-balance, desperation three at the basket. The ball clanged off the backboard and into the net as time expired to give the Spartans the lead, 25-22.

The start of the second half featured a more free-flowing, offensive style. Bridges connected on a pair of threes in the first six minutes, as the Spartans extended their lead to 38-32. It appeared the Spartans, considered a national championship contender by many, were beginning to solve Syracuse’s zone. It wasn’t to be, however, as Michigan State wouldn’t score again for almost four minutes. Brissett buried five free throws and junior Frank Howard made a mid-range jumper to cut the lead to one.

The next seven minutes were a cycle of Michigan State pushing its lead out to four or five, and Syracuse using the free throw line to remain in striking distance. When freshman forward Marek Dolezaj knocked down a couple of free throws with 4:23 remaining, the Orange had their first lead of the half at 49-48.

Trailing 52-47 with under a minute to go, Battle made a jumper to keep the Spartans alive. The Spartans got the steal they needed with seven seconds remaining and trailing by three. Rather than playing defense straight up, Syracuse head coach Jim Boeheim elected to foul intentionally. Instead of missing the second shot intentionally, McQuaid made both shots and fouled Battle on the inbounds pass. Battle converted twice, and Boeheim once again chose to foul. Once again, the Spartans made both free throws with three seconds remaining and fouled. Junior center Paschal Chukwu missed the second free throw, but sophomore guard Cassius Winston’s half-court heave came up empty. The upset was complete.

Pretty much any other year, Syracuse’s run from the First Four to the Sweet 16 would be one of the biggest shockers. This tournament has not been like any other, however. The 2018 tournament has featured upset after upset. UMBC became the first No. 16 seed to knock off a No. 1 seed when it stunned Virginia. No. 13 seed Buffalo dismantled No. 4 seed Arizona. Loyola-Chicago, an 11 seed, and Nevada, a seven seed, will square off in the Sweet 16 on Thursday. There are as many No. 11 seeds remaining (2) as there are No. 1 seeds. Kentucky, a 5 seed, is the highest remaining seed in the South region.

With the victory, Syracuse will play in its 19th Sweet 16 game. In doing so, they became the fourth team to advance from the First Four to the Sweet 16 since the current format was introduced in 2011. The Orange will take on ACC rival Duke Friday at 9:37 PM.

On the flip side, the loss is Michigan State’s second upset loss in the last three NCAA Tournaments. In the 2016 tourney, the Spartans lost to No. 15 seed Middle Tennessee State in the first round.

Bridges says he’s crushed and heartbroken about not being able to get it done for the seniors.