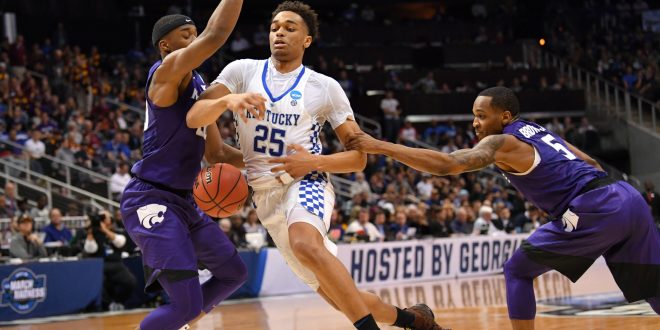 In a highly anticipated Sweet 16 matchup, Kansas State defeated Kentucky 61-58 in a battle of the Wildcats. Xavier Sneed led the charge for Kansas State with 22 points and 9 rebounds before fouling out with 1:14 left in regulation. Junior guard Barry Brown added 13 points, 3 rebounds and 3 assists and hit the go ahead layup with less than 20 seconds left.

Kansas State is going to the elite eight after knocking off Kentucky pic.twitter.com/3CHTreydl8

Kentucky had two chances to tie the game late, but failed to capitalize on either opportunity. The Wildcats were paced by P.J. Washington, who produced 18 points and 15 rebounds, but only converted 8-for-20 attempts from the free throw line. Shai Gilgeous-Alexander added 15 points, 5 rebounds and 5 assists.

More chaos in the South!

K-State upsets Kentucky to set up an improbable Elite 8 matchup with Loyola-Chicago. pic.twitter.com/7FCOUz4Bng

What Went Right For K-State?

While Kansas State struggled to shoot the ball from the field (19-54 overall), they were able to knock down timely threes and shot 9-22 (40.9%) from beyond the arc. The Wildcats forced 15 Kentucky turnovers and converted that into 24 points. K-State moved the ball flawlessly against a dominant Kentucky defense, assisting on 12 of their 19 made baskets.

Success Without Their Star

Dean Wade, who was a first-team All-Big 12 selection this season, played 8 minutes in the contest, but didn’t play a single minute in the second half. Wade suffered a foot injury in the Big 12 Tournament against Kansas, and hadn’t stepped on the court during the NCAA Tournament before this matchup with Kentucky. The junior forward averaged 16.2 points, 6.2 rebounds, 2.7 assists and 1.5 steals per game while shooting 55% from the field and 44% from beyond the arc.

What a coaching job by Bruce Weber. WOW. Beating Kentucky without Dean Wade. Lifetime contract for that man.

Coach Bruce Weber has been surprised about his team’s ability to win without their best player. He discussed how resilient of a group he has.

What Went Wrong for Kentucky?

The Wildcats were fortunate to only be down by 4 points at the half after shooting 6-23 (26.1%) with seven turnovers. Overall, Kentucky really struggled to shoot the ball efficiently from deep, converting 3-of-12 attempts. John Calipari’s squad also missed 14 free throws and struggled to take advantage of K-State’s lack of size.

Calipari took the blame for his team’s loss after not calling a timeout during a critical moment of the game.

Kansas State will face off against 11th seeded Loyola-Chicago in the Elite Eight on Saturday night at 6:09 p.m on TBS.

Kansas State is heading to the Elite 8!

The Wildcats will face Loyola-Chicago, setting up the 1st 9 seed vs 11 seed matchup in NCAA Tournament history. pic.twitter.com/bUWTbnrySV