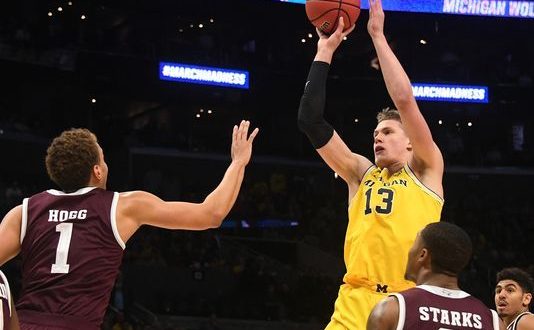 Michigan is of the Elite

For the first time since 2013, the Michigan Wolverines will advance to the Elite 8 in the NCAA Tournament.

The Wolverines Showed Their Teeth

After a close call winning 64-63 against the Houston Cougars in the second round, there is no question that the Wolverines came to play on Thursday. With their offense and defense playing in rhythm, they became a scary team to face. Michigan ended the first half with a 24 point lead, scoring 10 of their 14 three-pointers, and shooting 57.1 % from the field.

The Aggies just couldn’t keep up. The Wolverines shot 61.9% while the Aggies trailed with 47.8% in the second half. Head coach of the Aggies, Bill Kennedy, said “It felt like we ran into a buzz saw.”

Some Games Just Go Your Way

Head coach of the Michigan Wolverines, John Beilein, will be entering the Elite Eight for the third time in his tenure.

“You can just have games where everything is just happening your way, and you just try and get through the game and then survive because you look at that lead and it can go south,” Beilein said. “We did just enough to win.”

The Michigan Wolverines will enter the Elite Eight playing the Florida State Seminoles on Saturday at 8:49pm. You can watch live coverage on TBS.

@KatieWalsh095
Previous Kansas State Takes Down Kentucky in Thriller
Next Preview: No. 2 Florida Baseball Welcomes No. 4 Arkansas for SEC Showdown