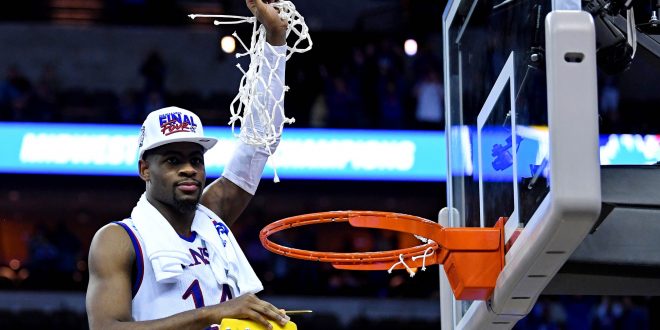 Jayhawks Rock On to Final Four

After defeating the Duke Blue Devils in overtime, the Kansas Jayhawks are in the Final Four for the first time since 2012.

The Road to the Final Four

After another great performance by the Jayhawks, here is a recap of their tournament run so far. The Jayhawks earned themselves a 1-seed heading into the 2018 NCAA tournament after a solid regular season and a Big 12 tournament win.

The first round saw Kansas matched up with Penn, a 16-seed with the rumblings of upset potential. Kansas took care of business 76-60 and advanced to the round of 32. The second round brought on the 8-seeded Seton Hall, who stayed within striking distance of the Jayhawks but would never take the lead in the second half. Kansas won 83-79. The Sweet Sixteen matched up Kansas with Clemson. Clemson’s second-half comeback effort fell short and the Jayhawks advanced again 80-76. These three match-ups would lead Kansas into a game with Duke, their toughest opponent yet.

Duke-Kansas was a game to remember. It was a tight match-up the whole way through, with no team leading by more than seven points. There were 18 lead changes, 11 ties and many shots to remember. After a back-and-forth first half, Kansas seemed to take some control of the match and led for much of the second half. With Kansas leading 69-68 and just two minutes left in the second half, Duke’s Grayson Allen drew fouls on back to back possessions and hit all four of his free throws to give the Blue Devils a three point lead.

With just 27 seconds remaining and a trip to the Final Four on the line, Kansas senior Sviatoslav Mykhailiuk drained a three-pointer to tie the game. Mykhailiuk said that the Jayhawks “make shots when they matter.” On the ensuing possession, Duke’s Grayson Allen put up a potential game-winning shot that bounced around the rim a few times before trickling off. From there, it was all Malik Newman in overtime.

The Jayhawks’ third-leading scorer from this season had himself a night to remember. Newman would go on to score all 13 of his team’s points in overtime, including a crucial go-ahead three.

While Newman dominated overtime, he didn’t just do it after regulation. The sophomore was beating up the Blue Devils all night long. Newman put up 32 points, 7 rebounds, 2 assists and three steals. He hit 5 of 12 threes and went 11-12 from the free-throw line. Newman’s 32 points set a career high for him. Even after scoring almost 40% of his team’s point, Newman said this win was because of his teammates.

On To the Next One

Kansas will take on the Villanova Wildcats in a match-up of the only two remaining 1-seeds. Kansas is 31-7 on the season and Villanova is 34-4. Tip off will be on Saturday, March 31st at 8:49 p.m. ET.