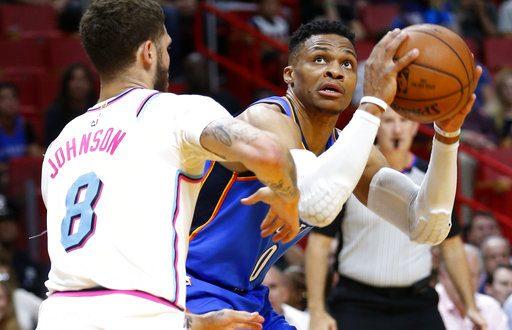 The Oklahoma City Thunder defeated the Miami Heat on the road, 115-93, Monday night.

With the win, Oklahoma City has made the playoffs for the eighth time in nine seasons.

The Thunder’s game resembled its season. A rough start, but a good finish. OKC started the season 8-12, but have gone 39-22 since. The now 47-34 Thunder defeated Houston and Miami on the road in a three-day span.

Miami opened the game tied for its best start to a game this season with a 12-o lead. The Thunder missed its 10 first shots to give Miami a 18-point lead. The game was 23-5 when Paul George and Russell Westbrook started hitting shots. 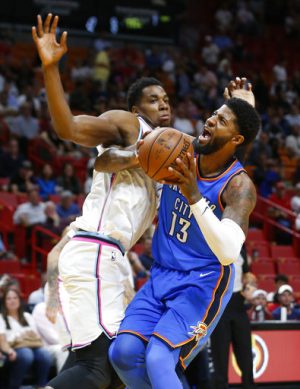 George finished with 27 points, 7-for-19 from the floor and 8-for-9 from the free-throw line. Westbrook scored 23 points, 18 rebounds and 13 assists, earning his 25th triple-double of the season.

The Heat continued to lead heading into the second half, 52-49.

With 10:28 remaining, the Thunder finally took the lead. A Corey Brewer layup made the game 85-84.

In the fourth quarter, the Heat were called for 10 fouls, while the Thunder only had three. OKC shot 11-17 in the quarter, including 14-15 from the free-throw line. Jerami Grant and Carmelo Anthony added 14 three-pointers for OKC. Grant scored 17 points and Anthony added 11.

The Oklahoma City defense held Miami to 5-20 from the floor and 1-7 from the three.

“It was the third-worst scoring margin for any quarter in Heat history, and the worst ever in a game at Miami,” according to USA Today. The Heat fell one spot to No. 7 in the East. The Heat will host the Toronto Raptors Wednesday at 8 p.m.

George said his team came and did what they wanted to do.

The @OKCThunder dominated the fourth quarter, and that was lead by @YG_trece as a playoff spot has been clinched! #ThunderUp pic.twitter.com/DT9fBdC9A2

The Thunder’s finale is Wednesday at 8 p.m. They’ll host the Memphis Grizzlies at Chesapeake Energy Arena.

Westbrook needs 16 rebounds Wednesday to average a triple-double for the second straight season. With 2,000 points and 800 assists in back-to-back years, Westbrook will be the second player to do it. He will join Oscar Robertson, who did it five times.

Kate Venezio is a fourth-year telecommunication-news student at the University of Florida. Kate does it all: Behind the camera she captures emotional moments as a photographer for the University of Florida Athletic Association. She's comfortable being in front of the camera, too. Kate interviews players, coaches, fans and family members for pre- and post-game coverage as a beat reporter for ESPN Gainesville/WRUF-FM. In addition, Kate produces the sports segment for the weekly WUFT News program. There, she's responsible for writing the script in its entirety to include production commands. The presentation includes video highlights and interviews taped and edited, and Kate then live anchors the final package on a daily deadline. In addition, she writes stories for wruf.com where she informs sports fans of local, state, and national trending topics. Kate also utilizes social media as a tool to help get the stories in front of viewers.
@@kate_venezio
Previous Game 3 of the Sunshine Showdown – Gators vs. Seminoles
Next Can The Wolves Overcome the Nuggets?