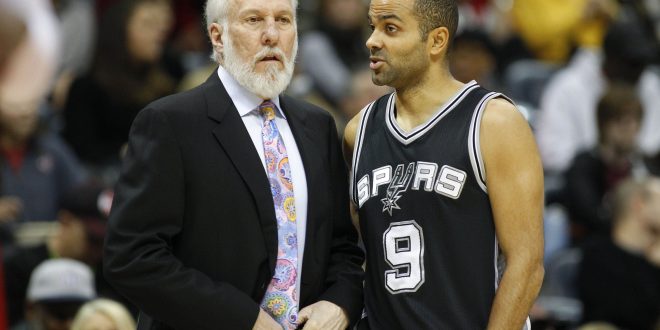 The San Antonio Spurs have been one of the most successful franchises in all of sports over the last 20 years. They have been a mainstay in basketball and one of the most consistent teams out there. Led by head coach Greg Popovich, San Antonio clinched their 21st straight playoff appearance Monday with a win over the Sacramento Kings 98-85 behind .

It’s been a while

Furthermore, the Spice Girls were the biggest music group and South Park was just making their controversial debut. Not to mention gas was only a $1.22. All in all it’s been a long time since the Spurs weren’t playing in the postseason. Their sustained excellence under coach Popovich is nothing short of remarkable.

It’s been a LONG time since the Spurs missed the playoffs… pic.twitter.com/hre51TrMai

The Spurs did not have an easy road to the playoffs this season. After losing star forward Kawhi Leonard for good on January 13th after only playing in 9 games didn’t help. And that’s not where the injuries stop. San Antonio lost Rudy Gay, Kyle Anderson, Manu Ginobili, and Tony Parker for stretches throughout this season as well and it almost cost them a playoff berth.

With the Western Conference so tight this year it was a miracle that the Spurs were able to pull it off. Currently there are 4 teams that have the exact same record as San Antonio (44-37). Now the Spurs did clinch and they’re good but that’s just to illustrate how close it is in the West.

It was an uphill battle this season. Following a win at Phoenix on February 7th the Spurs dropped 9 of their next 11 games and were in serious danger of their 20 year streak coming to an end. Fortunately coach Pop was able to steer the ship in the right direction and the Spurs rattled off 6 wins in a row and have won 10 of their last 14.

This has been on of the best coaching jobs that legendary coach Greg Popovich has put together in San Antonio.

The feud, disagreement or whatever it is between the Spurs and star forward Kawhi Leonard could have been a downfall of this team. Leonard did not seem to trust the Spurs doctors and set off on is own to solve his injury issues. It became a huge mess and will likely end up with Leonard joining another team. But that’s besides the point. This season was still at stake.

Injuries and a very old roster were two more obstacles the Spurs had to get over, but they did it no problem. Pop deserves a bunch of credit for this season. The Spurs may not win the Championship this season but just the fact that they were able to turn it around and make it into the playoffs for yet another year is quite an accomplishment.

The Spurs wrap up the regular season Wednesday against New Orleans, and who knows, maybe they can make some noise in the postseason. With Pop running the show, anything’s possible.

… and yet the Spurs still made the playoffs. Spurs gonna freaking Spurs, man.