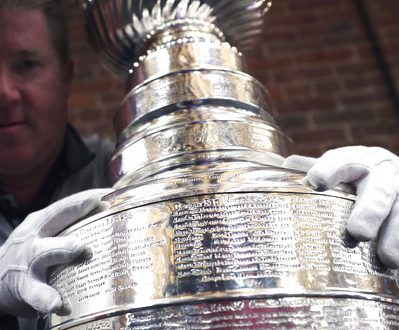 National Hockey League's Mike Bolt, who is a keeper of the Stanley Cup when it travels, holds onto the top layer of the Stanley Cup in Boston, Monday, April 2, 2018. The names of Hockey Hall of Famers like Bobby Hull, Maurice "Rocket" Richard and Gordie Howe will be removed from the Stanley Cup to make room for the next generation of champions. When a new layer is added to the 126-year-old trophy, the championship teams from 1954-65 will need to be removed so the trophy doesn't grow too big to travel. (AP Photo/Charles Krupa)

First Round of NHL Playoffs: The Battle for Pennsylvania

The two-time defending Stanley Cup champion Pittsburgh Penguins begin their playoff journey in hopes to capture their third straight title. Taking on in-state rival, the Philadelphia Flyers, the team that once upset them in the 2012 season. These two teams haven’t faced off in the playoffs in six years and aren’t expected to disappoint. This matchup will be one of the most heated first-round faceoffs of the 2017-18 Stanley Cup playoffs.

The back-to-back Stanley Cup champions are trying to become the first three-peat winners since the New York Islanders in the 1980’s. The Penguins have had an impressive season, exposing teams with their speed, skill and experience. The team will have home-ice advantage, which could be a deciding factor for this game. The Penguins boast the best home record (30-9-2) in the Eastern Conference. Having an unmatched roster that includes Sidney Crosby, Evgeni Malkin and Phil Kessel, the lines haven’t changed much from the ones that won the previous two Cups. Penguins Captain, Sidney Crosby stresses the importance of this rivalry and the history that’s behind this matchup.

Today is the day.

The Philadelphia Flyers, on the other hand, faced adversity early in the season. Losing 10 straight during, the following up with a stretch of seven wins in eight games they are the definition of an –up-and-down team. Adding to this, the team also posted 11 wins in 23 games, including a 10-1 streak. Goaltender, Brian Elliott is back for the playoffs, returning from a core-muscle surgery. This could be good or bad for the Flyers, being that Elliot has played just two games since his return.

On the bright side, the Flyers’ defense has helped them to the fifth-lowest shots-against average this season and their offense is the 11th-best in the league. The move of Center Claude Giroux to left wing has proven to be successful, finishing out the regular season with a career-high 102 points and could easily be considered the most under-rated Hart Trophy candidate.

The battle for Pennsylvania takes place on Wednesday night at 7 p.m. in PPG Paints Arena.