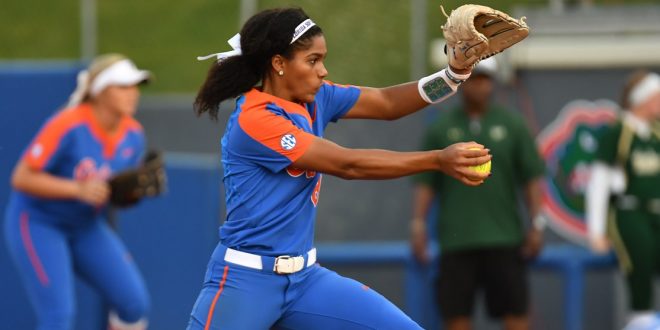 No. 6 Gator Softball Struggles Against No. 13 Florida State, Lose 4-1

The Florida Gator Softball team fell to the Florida State Seminoles 4-1 in the first game of the 2018 Fresh from Florida Sunshine Showdown series on Wednesday night in Tallahassee. Florida managed to get only two hits, while the Seminoles had five.

Florida State got on the board early with a solo home run from Carsyn Gordon in the bottom of the first, giving FSU a 1-0 lead. Then, UF’s Aleshia Ocasio ended the inning with back-to-back strikeouts.

The Gators finally got on the board in the top of the third when Kayli Kvistad hit an RBI double to score Alex Voss from second.  But, FSU found a way out of the jam as Jordan Matthews hit a fly out to left field to end the inning. This left things all tied up at 1-1.

Fast forwarding to the bottom of the fourth, the Seminoles scored a run on an RBI single from Zoe Casas. They had one out and two runners on base. Then, FSU’s Cassidy Davis picked up a walk and bases were loaded for Anna Shelnutt. However, Ocasio got the Gators out of the jam and FSU led 2-1 at the end of the fourth.

Seminoles Making It Hard for Gators

In the top of the fifth, FSU found their way out of a jam. There were Gator runners on every base with two outs. Matthews with a pop up to the infield ended the inning for the Gators.

Then, at the bottom of the fifth, FSU’s Cali Harrod hit a triple to right field scoring her teammate, Morgan Klaevemann. The Seminoles extended the lead even more when Gordon grounded out to Sophia Reynoso at short to allow Harrod to score. That made the score 4-1 and that ended up being the final score of the game.  Florida is now 34-7 on the year.

The Gators will have to bounce back quickly as they get ready to take on 11th ranked South Carolina in a three-game series at home. First game against the Gamecocks is Friday at 6:00 p.m.

Courtney Mims is a junior telecommunications major at the University of Florida. She enjoys covering all Gator sports and drinking gallons of Starbucks coffee while doing so.
Previous Boston Celtics Mindset Going Into Playoffs
Next Orange and Blue Preview: Gator Wide Receivers