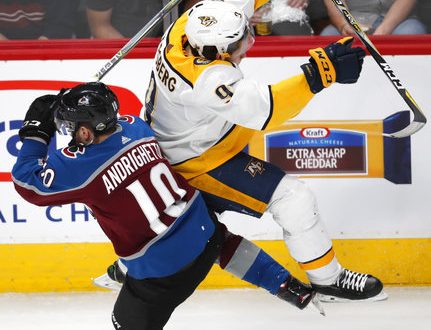 The Nashville Predators defeated the Colorado Avalanche last night 3-2. The Avalanche are currently down 3-1 in their first-round series and need to make some serious adjustments if they plan on moving onto round two. But you can’t blame it completely on the Avalanche offense.

The star of the night was Pekke Rinne, the Nashville goalie and Venza Trophy finalist had a total of 31 saves to make up for the prior 4 goals he allowed in game 3 of the series. In the first two periods, Rinne was swarmed by Avalanche player throughout the majority of the series allowing 0 goals. The Predators never trailed in the game and the Avalanche were playing catch up from the start.

Jonathan Bernier, Goalie for the Avalanche had a stellar game that was overshadowed by a loss.  Bernier made 23 saves before he had to leave the game in the second period with an injury.

Up until 15:33 in the first period it was a stalemate. Filip Forsberg scored after receiving the assist from Ryan Johansen.  It was one of Bernier few mistakes during the game but it was costly. It was clear the Predators had come out strong but the game was still not completely decided.

A major blow to the Avalanche came when Nashville’s Colton Sissons extended the Predators lead to 2-0 at 7:18 of the second period. It was bad but the Avalanche still were aggressive and taking shots throughout the period.

The nail in the coffin was delivered when Nashville went up 3-0. Their goalie had an amazing night; it was clear everything was coming full circle for the Predators. Centerman Craig Smith finished the Avalanche with 11:49 in the second period and put the Predators up 3-0. 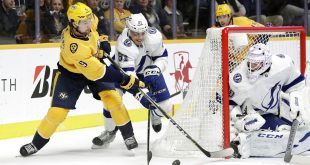 For the second time this season, the Tampa Bay Lightning fall to the Nashville Predators …