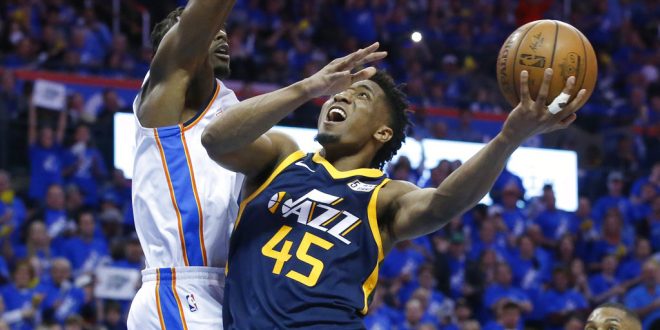 An hour prior to tipoff of Wednesday’s Game 2, Utah Jazz rookie Donovan Mitchell was listed as questionable due to a foot contusion. Fortunately, for the Jazz, the rookie not only played, but he furthered his case for Rookie Of The Year.

13 of Mitchell’s 28 points came in the fourth quarter with the Jazz down ten to Oklahoma City, leading Utah to a 102-95 win. With the series tied at 1-1, the rookie-led Jazz team now have home court advantage.

Help From His Team

Despite Mitchell’s impressive final game stats, the Louisville alumni struggled to get things going in the first half. However, with help offensively from Ricky Rubio and Derrick Favors, the Jazz held a seven-point lead after two quarters. Rubio finished the game with 22 points, nine assists, and seven rebounds while Favors had himself a double-double, scoring 20 points and snatching 16 rebounds. Utah’s aggressive defense held the Thunder to just 39 percent shooting in the first half.

It did not take long for the Thunder to get things going in the third quarter. Forcing turnovers and running the fast break, the Thunder went on a 19-0 run, taking a 77-67 lead.

The Thunder’s big three caught fire, combining for 15 of the 19 points during the run. During the stretch, Mitchell struggled, missing easy shots around the rim that are typically automatic.

Just when Jazz fans at home were ready to turn off the television, Mitchell began to get a rhythm going. With two quick buckets in the final 30 seconds of the third quarter, the young star made it clear he was not done performing yet.

In the fourth quarter, the Thunder trio could not counter Mitchell, combining for 0-14 shooting.

With Donovan Mitchell’s 28-point performance, he made history. Scoring 55 points in Games 1 and 2, Mitchell now holds the record for most points in the first two playoff games by a rookie — the former record holder is a guy named Michael Jordan.

Donovan Mitchell has scored a total of 55 points in his first two playoff games, which is the most by a guard in NBA history.

The previous record holder is someone you may have heard of pic.twitter.com/Q9wfJhVpCo

Now, the Jazz will host two home games, hoping to return to Oklahoma City with a 3-1 lead. Game 3 is set for 10 p.m. Saturday in Salt Lake City.