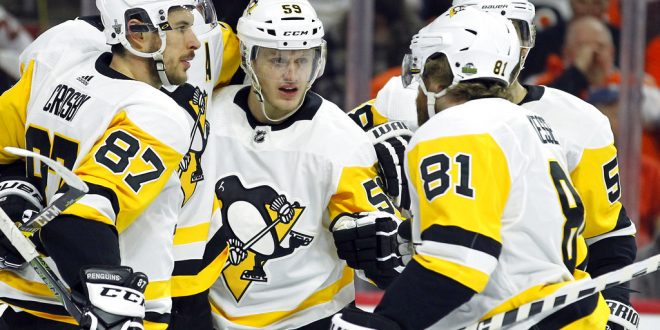 The defending two-time Stanley Cup champs the Pittsburgh Penguins are another step away from completing their quest for a three-peat.

Captain Sidney Crosby was a huge reason for Pittsburgh Penguins’ victory over the Philadelphia Flyers, contributing with a goal and an assist. He also passed Mario Lemieux for most playoff points in franchise history with 173. So far, Crosby has nine points in this series (five goals, four assists).

Aside from Crosby who made Penguin playoff history, no player from Pittsburgh stood out. It was a true team effort. All five goals were scored by five different players. The Penguins were also solid defensively. Matt Murray stopped all 26 shots and the skaters on the ice blocked 16 shots. Aside from a 5-1 loss in Game 2, the Penguins have absolutely owned this series, outscoring the Flyers 17-1 in their three victories and outshooting them 124-97.

Penguins head coach Mike Sullivan has liked what he has seen from his team.

The raw numbers say that Pittsburgh is dominating this series. What do the underlying numbers say? According to Natural Stat Trick, the Penguins are controlling the puck over 50 percent of the time (50.34 *CF%). They’re not generating a lot of scoring chances, with just 78 which is ninth in the postseason. They are doing a good job of limiting scoring chances, allowing just 72 which is fourth in the postseason. The Penguins are also making life easy for goaltender Matt Murray, allowing the fourth fewest high danger chances at 22.

The Flyers are controlling the puck just under 50 percent of the time (49.66 CF%). The underlying numbers say that this series isn’t as lopsided as one may think. But the playoffs are about taking advantage of your opportunities, and the Penguins are certainly doing that more so than the Flyers.

*CF% stands for Corsi-For Percent. It measures the number of shot attempts taken by a team.

Previous Preview: Gators Gymnastics Are In St. Louis For NCAA Championship
Next AJ McCarron looks to become a starter again.