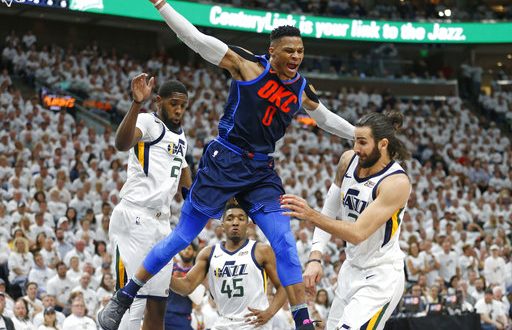 The OKC Thunder is on the edge of elimination unless they pick things up in Game 5 of the playoff series against the Utah Jazz. The Thunder lost Monday night 113-96 in game 4 with the Jazz currently winning the series 3-1.

However, it wasn’t all Utah. The Thunder started out the first half strong. They even led all of the first and most of the second quarter. It wasn’t until there was only 1:43 left in the second quarter when Joe Ingles made a 23-foot three point jumper to give the Jazz the first lead of the game (50-49.)

Thunder’s Russell Westbrook and his teammates were unable to finish on top and regain the lead. Thus, the Jazz led by six coming into the second half, 58-52.

Nevertheless, Thunder’s Paul George still scored 32 points for his team adding two assists and six rebounds. Russell Westbrook was also hot for the Thunder, adding 23 points, three assists and 14 rebounds. Unfortunately for the Thunder, this was never enough to regain the lead in the second half and secure a win.

Coach Donovan says that by the fourth quarter his team dug themselves into a hole they just couldn’t get out of.

But the Thunder didn’t go out without a fight, somewhat literally. Things got heated between the two teams, which resulted in a total of seven technical fouls and almost one ejection. Thunder’s Westbrook was unhappy with Utah’s Ricky Rubio’s phenomenal game of 13 points, eight assists and six rebounds.

Consequently, sparks flew between the two players as Westbrook tried to stop Rubio from adding more baskets. Westbrook picked up his first foul by “accidentally” tripping Rubio and the tension remained between the two throughout the entire game.

In the end, it’s playoff time and emotions will rise no matter what.

Game 5 will be in Oklahoma City starting at 9:30 p.m. The game will be covered on NBATV.

PG finishes w/32 but Thunder falls to Jazz in Game 4. Back to OKC for number 5 Wed night in LOUD City. pic.twitter.com/NuYLJ1aB54

Previous NBA Playoffs Preview Game 4: Timberwolves Look to Even the Series Against the Rockets
Next Stanton Hits 5th Homer with Yankees