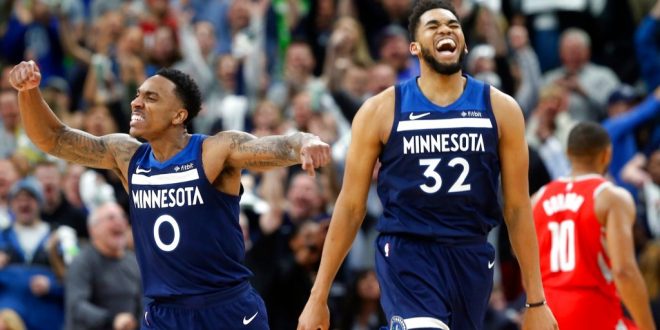 Minnesota Timberwolves' Jeff Teague, left, and Karl-Anthony Towns celebrate a basket during the second half of Game 3 in an NBA basketball first-round playoff series against the Houston Rockets, Saturday, April 21, 2018, in Minneapolis. (AP Photo/Jim Mone)

NBA Playoffs Preview Game 4: Timberwolves Look to Even the Series Against the Rockets

Being down 2-0, the Minnesota Timberwolves came out swinging in Game 3 of the Western Conference Quarter Finals. They faced the heavily favorited Houston Rockets at Minneapolis this past Saturday night. The Timberwolves looked like a completely different team compared to Game 1 and Game 2. One of the reasons must’ve been because of the chip they had on their shoulder. They will be in front of a home crowd who hasn’t seen their Wolves’ perform in a playoff game since 2004.

It ended well for the home team, as they wrote a different narrative for the series, leaving Game 3 with a 121-105 victory. This gave the city of Minneapolis their first playoff win in 14 years.

Rockets Shot Out of the Sky

But besides the fact of his doubters, KAT came out in Game 3 and put on a clinic. He looked unstoppable when dropping 18 points and battled for every rebound off the rim, collecting 16 of them on the night. His opponent on the floor for most of the game is Capela, who had no answer against KAT.

There were a lot of highlights.

James Harden and the Houston Rockets will not have another bad game. Even though KAT exploded and showed his true potential in the playoffs, Clint Capela will already watch film and maintain his positioning against Towns. Chris Paul won’t get into foul trouble again. James Harden has a huge possibility of dropping 40-plus points again. If he does so, the Rockets will lead the series 3-1, heading back to Houston. Rockets 112-100 Timberwolves.

Recent grad from the University of Florida. Editing all articles on here while helping out the newbies. Love all things basketball.
@@MarcoJMartinez_
Previous Bruins and Capitals Each Look to Win Their Series in 6 Games Tonight
Next Thunder on the Edge of Elimination After Losing in Game 4 Against the Jazz