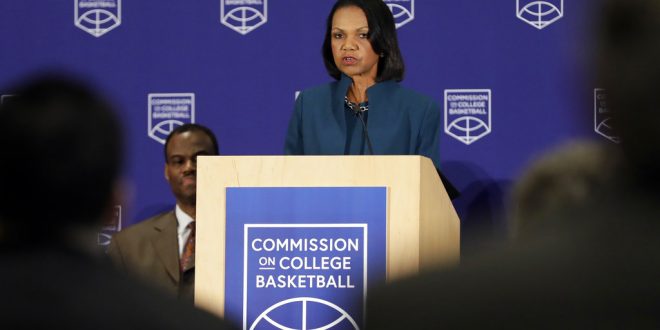 Former U.S. Secretary of State Condoleezza Rice speaks during a news conference at the NCAA headquarters, Wednesday, April 25, 2018, in Indianapolis. The Commission on College Basketball led by Rice, released a detailed 60-page report Wednesday, seven months after the NCAA formed the group to respond to a federal corruption investigation that rocked college basketball. (AP Photo/Darron Cummings)

On Wednesday, American political scientist, Condoleezza Rice, and her committee were tasked with a difficult task. The main goal for Rice and her team was to address the many issues that involve the NCAA.

Media members, such as The Athletic’s Seth Davis, believe the most important issues in college athletics were simply not addressed. These include topics like athletes benefiting from their own likeness, penalties for corrupt agents and apparel companies, etc. However, some believe Condoleezza Rice’s team offered constructive recommendations as a whole.

Many college basketball analysts have been eager to voice their opinion on Condoleezza Rice’s recommendations, and ESPN analyst Seth Greenberg is no exception. While on ESPN Gainesville radio host, Steve Russell’s show Wednesday, Greenberg voiced his opinions on the matter. Essentially, Greenberg’s biggest qualm is in regard to the AAU/summer event tournaments. While Rice suggests a complete remodeling of the summer tournaments, Greenberg believes there are minor fixes to be made — this includes transparency and accountability.

Summer Hoops does not need a complete https://t.co/h1UH0kohtr needs greater transparency & accountability. Less worry about where coaches sit ,more about compliance & certification 4 coaches & events.Summer Hoops helps so many kids & there are a lot of very good people involved

While there are a recommendations Greenberg does not agree with, he does side with Rice on one thing. He thinks punishments should be stricter and people in high power should be held accountable.

If the NCAA were to act on the suggested solutions presented by Condoleezza Rice and her committee, it could be a significant step in the right direction. Following the NCAA’s decision, the years to follow will be the ultimate decider for the future of college athletics. While there are mixed reviews, one thing is for certain — a change in the NCAA is more than needed.