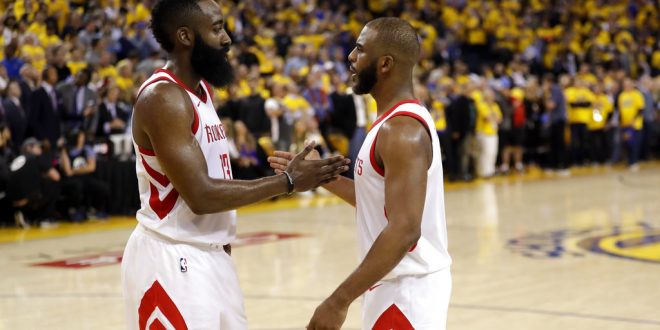 Behind Strong 4th Quarter, Rockets Edge Warriors to Even Series

Things weren’t exactly going the Rockets way towards the end of the third quarter. Getting outscored 34-17 and staring a double-digit deficit directly in the face going into the fourth is a position James Harden and company would’ve loved to have avoided.

But at the end of the day, you can only play with the cards you’re dealt. And luckily for the Houston Rockets, the fourth quarter turned out to be a royal flush.

Behind a solid effort from the entire team, both offensively and defensively, Houston outscored Golden State 25-12 in the final quarter of play to win Game 4 of the Western Conference Finals 95-92. The home crowd of 19,596 were left speechless watching the dynamic trio of Stephen Curry, Kevin Durant and Klay Thompson sputter down the stretch in a building where the team had won 16 straight home playoff games.

The first quarter couldn’t have started any better for the Warriors as they began the game on a 12-0 run, holding the Rockets scoreless though the first 5:13 of the game. Things were looking pretty bleak for a Rockets team that was blown out by 41 points in the same building just two nights prior.

Thankfully for the Rockets, this game took on a different route.

Houston began to chip away at the early 28-19 deficit after the end of the first quarter, accumulating a game-high 34 points in the second behind a strong effort from both of Houston’s star players. Chris Paul and James Harden both combine to score all nine of Houston’s field goals in the second quarter of play.

Golden State allowed the Rockets to take a 53-46 lead into the break largely due to poor shot selection and an abysmal effort from the 3-point line. The Warriors only managed to make one three, a Klay Thompson tray late in the quarter. The rest of the team went a combined 0-for-5 from deep.

The second half took on a very similar pattern from the first.

Golden State stormed out of the locker room, turning a seven point deficit quickly into a one possession game just minutes into the third. The Warriors made much needed adjustments in the third, improving their shot selection by taking it to the basket, and also improving from downtown. Golden State went 5-of-8 from 3-point range, with Stephen Curry going 4-of-7 just by himself.

Golden State quickly gained and maintained the momentum of the game towards the middle of the third quarter. The Warriors were able to shut down Houston during the final half of the third, outscoring them 23-8 and going up by as many as ten points. Golden State took a 80-70 lead into the fourth, and at this point of the game, looked primed to finish off Houston and take a commanding 3-1 series lead.

The Rockets, however, had other ideas.

Houston only allowed the Warriors to score four points over the first six minutes of the fourth quarter, taking an 85-84 lead thanks to a Trevor Ariza three with 6:03 left to play in the game.

Both teams would go back and forth, trading baskets with each other up until the final minute of play. Golden State actually had an opportunity to tie or take the lead in the final seconds of the game, but sloppy floor spacing lead to an ill-advised pass from Kevin Durant to a heavily covered Klay Thompson. Thompson then shoots a 16-foot prayer that lands just short of the basket and into the open arms of Chris Paul.

The game looked to be coming to a close at this point, but thanks to Chris Paul missing his first free throw and making the second, the Warriors were able to call timeout and setup for one final chance at tying the game.

It looked as if Golden State got what they wanted on the final possession, an open Stephen Curry in front of the Rockets bench, but time ran out before he could get his shot off, leading to a 95-92 Rockets’ victory and a series tied at two games a piece.

Golden State’s Stephen Curry, Kevin Durant and Klay Thompson combined to score 67 of the team’s 92 points. Curry scored 28 points, making six from deep, and Kevin Durant had a double-double, filling up the stat sheet with 27 points and 12 rebounds. Unfortunately for the Warriors, Klay Thompson only managed ten points for the game. His poor performance can potentially be looked at as a reason Golden State fell short on Tuesday night.

Houston’s James Harden and Chris Paul both had big nights for the Rockets. Harden scored a team-high 30 points, while Chris Paul scored 27, hitting five three’s in the game. Eric Gordon was able to contribute off the bench for the Rockets. He scored 14 points for the team, making all five of his free throw attempts.

Both teams were relatively even in team stats, as the score would lead to indicate, however one stat did stand out among the rest. Houston outshot Golden State 23-27 to 13-14 on the free throw line, showing that Houston was the more aggressive team getting to the basket.

Game 5 of the series is Thursday night in Houston.