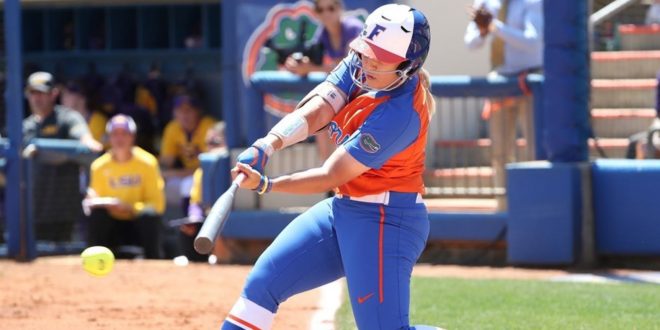 USA Softball named juniors Kelly Barnhill and Amanda Lorenz as top four finalists for the 2018 USA Softball Collegiate Player of the Year. Barnhill and Lorenz are joined by Paige Parker of the Oklahoma Sooners and Rachel Garcia of the UCLA Bruins.

Barnhill is the reigning Player of the Year and is the only Gator besides Lauren Haeger in 2015 to win the award. In interviews before the Gainesville Super Regional, Barnhill and Lorenz said they were focused on beating No. 15 Texas A&M and advancing to the Women’s College World Series.

Kelly Barnhill (28-1) is a right-handed pitcher from Marietta, Georgia, who is also the 2018 SEC Pitcher of the Year. She has thrown five complete-game no-hitters and has pitched 16 games with 10 or more strikeouts. Her 0.98 ERA and 300 strikeouts are good for ninth and seventh in the nation among Division I pitchers. Additionally, she is third overall in strikeouts per seven innings and leads the nation with only 2.53 hits allowed per game.

Amanda Lorenz is a left fielder from Moorpark, California, who is the 2018 SEC Player of the Year. She has reached base safely in 61 appearances this season. Contributing to her run is pitchers walking her once per game. Despite this, Lorenz has a .418 batting average and a .575 on-base percentage, leading to 1.11 runs per game. Lorenz had 19 multi-hit games and 16 multi-RBI games.

The winner of the award will be announced at the team-only banquet on Tuesday, May 29. The Women’s College World Series takes place from May 31 to June 5/6 at USA Softball Hall of Fame Stadium in Oklahoma City, Oklahoma.