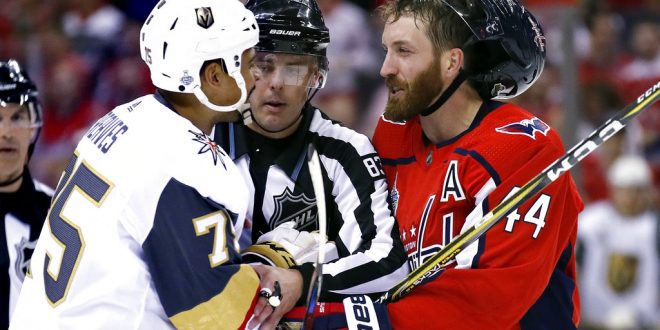 After success at home in Game 3 of the Stanley Cup Finals, the Washington Capitals will look to extend their lead in the series to 3-1.

After the Vegas Golden Knights and Washington shared a win apiece in the first two, the Capitals headed home for the first time in the series. It’s the first time an NHL Stanley Cup Final has been played in the Capital One Arena since 1998, then named the MCI Center, according to NBC Sports.

The Capital players to grab the headlines were Alex Ovechkin and Evgeny Kuznetsov. Ovechkin opened the scoring for the Capitals in the second period, scoring his first home Stanley Cup goal of his illustrious 13-year career, according to NBC Sports.

Kuznetsov extended the Capitals’ lead to 2-0 with his 27th point of the playoffs.

Kuznetsov on his goal:

Devante Smith-Pelly scored the third as the Capitals sealed a 3-1 victory over the Golden Knights to take a 2-1 lead in the series.

#Caps head coach Barry Trotz talks to the media prior to tonight's Game 4 of the #StanleyCup Final. #ALLCAPS pic.twitter.com/RMaLlOW0cL

Something that the Golden Knights have on their side is freshness. They’ve played 18 total playoff games compared to the Capitals’ 22 total games. However, the Capitals have the momentum.

In a high-scoring affair for both teams, Vegas came out on top 6-4. The Golden Knights need their forwards to replicate this kind of output for Game 4.