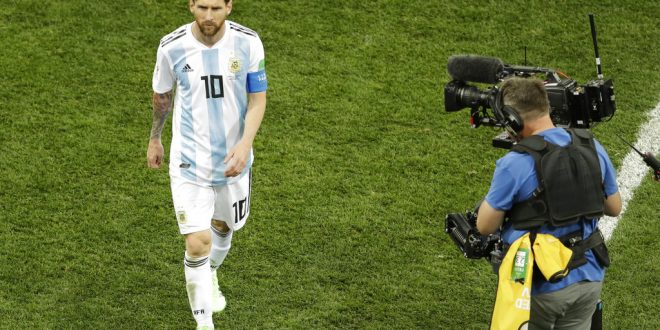 Argentina's Lionel Messi leaves at the end of the group D match between Argentina and Croatia at the 2018 soccer World Cup in the Nizhny Novgorod stadium in Nizhny Novgorod, Russia, Thursday, June 21, 2018. (AP Photo/Michael Sohn)

With the second string of group-stage matches underway in the 2018 FIFA World Cup, four teams have punched their ticket to the knockout stages.

After Russia and Uruguay managed to qualify in Day 6 and Day 7 respectively, France and Croatia both turned in solid performances on Day 8 of the tournament to double the current list of qualifiers.

Meanwhile, Denmark was forced to settle for a 1-1 draw against Australia in Thursday’s morning match. Then came disappointment for Lionel Messi and Argentina, as they were throttled by a tough Croatian side, 3-0.

Today’s World Cup action would kick off with a gritty, and semi-controversial, match between Denmark and Australia.

Midfielder Christian Eriksen, 26, got the Danish on the score sheet in the seventh minute by firing a vicious strike into the roof of the net.

But Australia would equalize just over a half hour later through a VAR-awarded penalty. After a deliberite handball in the box was given against Denmark’s Yussuf Poulsen, Mile Jedinak converted from the spot to level the match at 1-1.

Denmark now sit firmly in second place of Group C. They can clinch qualification in their last group-stage match against France on June 26.

Soccer can sometimes be a cruel sport, and the Peruvians learned just that at the World Cup. Despite being one of the most impressive attacking times of the tournament, Peru have crashed out of the tournament after their 1-0 loss to France on Thursday.

Winger Kylian Mbappé latched on to Oliver Giroud‘s deflected shot in the 34th minute to give France a first-half lead.

What do you do when you become the youngest French goalscorer in FIFA World Cup history?

It was all they needed, as Didier Deschamps‘ men turned in a fine defensive performance to keep Ricardo Gareca‘s attack at bay.

It is Peru’s first World Cup appearance since 1982. They have one game remaining against Australia to try and end their campaign on a high note.

Thursday’s schedule would also see a blockbuster matchup between Argentina and Croatia.

Sadly, only one side turned up on the day.

Croatia would put a dent in Argentina’s hopes of advancing to the next round by trouncing Jorge Sampaoli’s team, 3-0.

After a cagey first half, it was a horrendous goalkeeping error by Argentina’s Willy Caballero that led a gift of an opening goal for striker Ante Rebic.

From there, the experienced La Liga duo of Luka Modric and Ivan Rakitic added a touch of class and emphasis to the Croatian’s victory with a goal apiece.

Paulo Dybala and Ángel Di María were surprisingly left out of the starting lineup for Argentina.

The attacking partnership of Messi and Sergio Agüero was left looking frustrated throughout, and it was the latter that was substituted in the 54th minute.

Iceland can further dampen Argentina’s hopes of advancing to the next round with a win over Nigeria on Friday. That match will kick off at 11 a.m. ET.

Argentina’s last match will be against Nigeria on July 26 at 2 p.m. They will hope they have something to play for at that point.

Nigeria will square off with Iceland at 11 a.m. ET, and Friday’s action concludes with Serbia battling Switzerland at 2 p.m. ET.