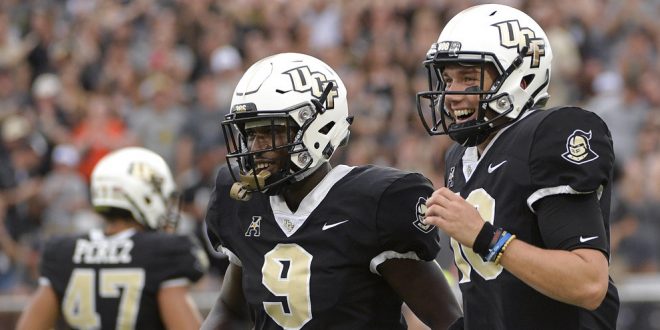 The state of Florida has several high-profile college football teams in the Florida State Seminoles, the Miami Hurricanes, and the Florida Gators. The best two records in 2017 did not belong to any of these teams however. They belonged to the 13-0 UCF Knights and the 11-3 Florida Atlantic Owls.  Now in 2018 the landscape for both teams has changed, but the two Group of 5 programs face each other in Week 4. The outcome determines who the best team in Florida truly is.

In 2017 UCF had one of the most dominant seasons in recent history. They outscored opponents by an average of 22.9 points per game and fielded one of the most explosive offenses in the country. The Knights ended the season undefeated, with an AAC Championship, and a Peach Bowl victory over the Auburn Tigers. Then they lost their head coach.

Scott Frost left after season’s end to take the Nebraska job, his alma mater. He did not leave an empty cupboard however. Most of the talented skill players, including quarterback Mckenzie Milton, still have a few years of eligibility left. After Frost’s departure UCF followed the same hiring strategy they used to get him in the first place. They eventually hired Josh Heupel, the former offensive coordinator for Oklahoma and Missouri. Heupel runs a similar spread system to Scott Frost, but puts more emphasis on playing faster and attacking defenses vertically.

In two games played this season, UCF has not lost a step from 2017. They have blown out conference foe UConn 56-17 and shut out South Carolina State 38-0. Mckenzie Milton has continued to develop as a passer and he is even better attacking downfield. The UCF defense lost some leaders in the offseason, including cornerback Mike Hughes and linebacker Shaqeum Griffin. The defense has performed well so far, but it may have weaknesses, especially in giving up big plays.

While UCF has been dominant so far, they have missed a game. Due to Hurricane Florence, their non-conference game against North Carolina was cancelled. That makes it two years in a row that weather has cut a game off of UCF’s schedule.

UCF hasn’t played in two weeks now and that may be an issue. If UCF is rusty coming off their unexpected bye week, then FAU may have a chance to upset the Knights. If they aren’t, then it could be business as usual.

Rebuild for a Repeat

Lane Kiffin’s FAU team started off REALLY slow last season. They began 1-3 and then rattled off 10 straight wins. That included an 8-0 conference record, a Conference-USA title, and a bowl win over Akron. Much like the Knights, the FAU Owls had a dominant offense led by running back Devin Singletary. Their defense was good last season and should take a step forward due to a large amount of returning players. The biggest difference between the Owls and Knights: the Owls are replacing a quarterback and an offensive coordinator.

Jason Driskel, brother of former Florida Gator quarterback Jeff Driskel, was a facilitator on offense for FAU last season. He wasn’t a critical part, but he operated the offense well and set up FAU for success. Now he’s gone. Offensive coordinator Kendall Briles is gone as well after taking the same job at Houston. Kiffin replaced him with 25 year-old Charlie Weis Jr., but everyone knows Kiffin is the real mastermind of the offense.

New quarterback Chris Robison struggled early in the season in the opening loss to Oklahoma, but has begun to hit his stride. His improvement will help raise this team’s ceiling, but let’s be honest: this is Devin Singletary’s team. He has picked up right where he left off from last season, where he scored 32 touchdowns on the ground.

Motor has the most rushing TDs in the country. Some would say that's pretty good @_motor_2

Singletary is the primary identity of this team, and when he goes off there’s not many teams in the country that can stop the FAU offense.

FAU travels north to Orlando for this game, as the Knights will come down to Boca Raton next season. This game will be in Spectrum Stadium at 7:00 P.M. on national television for the whole country to see. To go along with the national attention, FAU hopes to spark a rivalry with this new series.

The winner between two high-powered offenses will probably be decided by one surprising thing: defense. Both teams can score at will, so the game will be won and lost on the individual stops and plays either defense can make. For UCF’s defense, they need to shut down Singletary and force Robison to beat them through the air. For FAU’s defense, the key is to keep UCF’s team speed in front of them and not let Milton attack them downfield.

While UCF is the favorite and has looked more impressive so far, the Owls can make this game a tough one. If for nothing else, this game should have lots and lots of points.

This game will be played on Friday night at 7:00 P.M. at Spectrum Stadium in Orlando.

Next week, UCF will host the Pittsburgh Panthers on September 29th at 3:30 P.M. That same day, Florida Atlantic will travel north to play Middle Tennessee State at 7:00 P.M.

While many teams kick off SEC play, Ole Miss will continue to play out of …