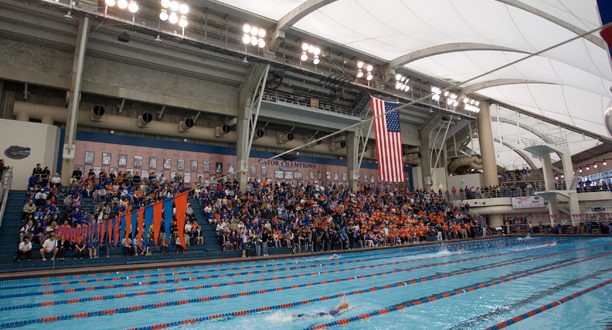 Florida Swim and Dive Kicks off Season Against FAU

Florida Women’s Swim and Dive will begin the 2018-2019 season on the road in sunny South Florida. Both the men’s and women’s teams will face the Owls today, but the women will travel around the area for two more road meets.

The women’s team will begin its first season under Head Coach Jeff Poppell. However, Poppell has been with the Florida since 2016, serving as an Associate Head Coach and working extensively with Olympian Caeleb Dressel. But, the Gators are poised to take in the new era nicely.

Today’s meet against FAU will be Florida’s third in three years. The Gators have taken the last two, winning 180-101 last season. The two teams will take the pool at 3 PM.

After FAU, the men’s team will head back up to Gainesville. But, the women’s team will go down to Coral Gables to compete against the Miami Hurricanes. The last time the Gators and the Canes met was during the 2016-2017 season, where Florida won 180-115. This meet is also scheduled for 3 PM.

The final meet this weekend is scheduled against Florida Gulf Coast in Fort Myers at 11 AM. Last season, Florida topped the Eagles 173-125.

Florida returns two All-Americans in Sherridon Dressel and Brooke Madden. Dressel’s 200-yard backstroke gave her the All-American honors. Madden was an All-American in the 1-meter and the 3-meter.

Second-team All-SEC and SEC All-Freshman team selection Taylor Ault is back for her sophomore campaign. At the SEC Championships, Ault took second in the 500-freestyle. Florida also returns 27 letterwinners.

Previous Are the Pats Done?
Next MLB Pennant Race Roundup: Who’s Out, Who’s In, Who’s TBD?