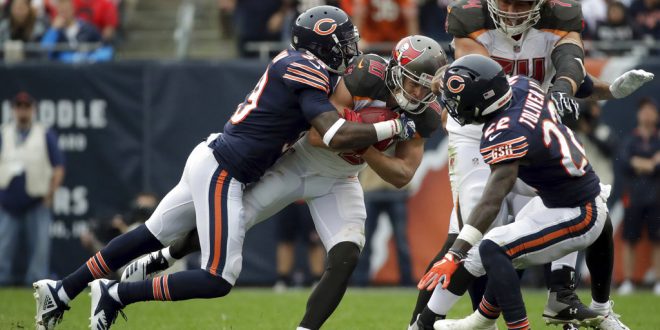 The season started so well. Deep throws, highlight plays and Fitzmagic. No one saw it coming, and now it all looks to be over.

The Tampa Bay Buccaneers have now lost their last two games due to one of the worst defenses in the league after they won their first two games with one of the top offenses.

The Bucs most recent loss was a 48-10 shellacking to the Chicago Bears that saw second-year quarterback Mitchell Trubisky throw a career-high six touchdowns…in three quarters.

In 2017, Tampa Bay had one of the worst defenses in the league. Third-worst in total rushing touchdowns given up (17) and dead last in total yards allowed per game (378.1) and passing yards per game (260.6).

There seems to have been no change in 2018 as the defense is the second-worst in total yards given up so far and have allowed 30 or more points in all but one game. And that trend continued against Chicago.

The defense forced the Bears’ offense to punt just twice all game last Sunday and allowed Trubisky to throw for six touchdowns and 354 yards.

The loss was so embarrassing that Buccaneers’ coach Dirk Koetter called for his own job.

Lots of questions loom after the beatdown. What now? Are the players the issue? Is there just a lack of talent? Is the problem the scheme of defensive coordinator Mike Smith? Should Tampa Bay ownership consider Koetter’s facetious request?

The team will have a bye week to mull over what to fix before traveling to Atlanta to play the Falcons on Oct. 14.

Even when the Bucs were winning, it was not the defense that was the reason. 35-year-old Ryan Fitzpatrick filled in at quarterback as Jameis Winston placed on a three-game suspension for off-the-field issues.

Fitzpatrick shocked everyone after he led the league in passing yards through three weeks with 1,230 yards and became the first quarterback to ever throw for 400 yards in three consecutive games.

But in Winston’s first game back in Week 4, Fitzpatrick was benched in the second half against the Bears after he threw an interception, was sacked twice and failed to throw a touchdown.

While Winston did not light up the box score (throwing a touchdown and two interceptions), the question of who the quarterback will still be more prevalent with his return.