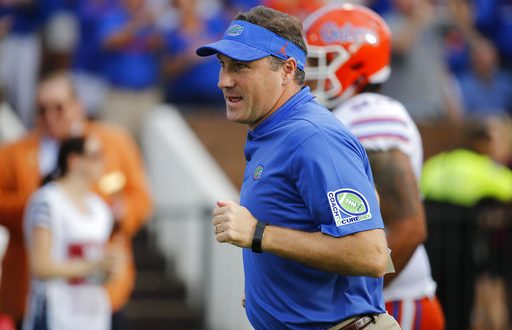 It’s a grand week for the Florida Gators football team. Tim Tebow is being inducted into the Ring of Honor, the 2008 National Championship team reunites and the No. 5 undefeated Louisiana State University Tigers return to the Swamp.

University of Florida head football coach Dan Mullen says he wants the student body to dominate the environment in the stadium. These are his expectations from Gator fans:

Mullen said Saturday’s game is important to the current team, but it is also a really big one for future recruits.

Last year, the Tigers beat the Gators by one point (16-17) in Ben Hill Griffin Stadium. That was back when LSU was unranked, and UF was No. 21. Wide receiver Josh Hammond said having the 2008 team in town motivates the team to play harder and get a win in front of them.

Florida leads the series 32-29-3, but LSU has won six of the last eight games. The last four games have been close ones, with a difference in scores of seven points or less.

LSU head football coach Ed Orgeron and Dan Mullen are no strangers to each other. Mullen faced the Tigers all nine of his seasons at Mississippi State, as the two programs were SEC West rivals, according to FloridaGators.com.

Mullen said Orgeron is an excellent coach and admires “what he does and how he does it.” He said it’s a lesson for all head coaches who take over new programs to be like Orgeron by putting their stamp on it.

The Gators moved into the AP Top 25 rankings after a 13-6 win at Mississippi State on Saturday. Mullen said the team followed the plan to win.

Well that was fun! #GoGatorspic.twitter.com/N8pTvwb5IC

Quarterback Feleipe Franks completed 21 of 31 passes for 213 yards and had one interception. Mullen said this is where he has improved the most:

Mullen says Franks needs to improve on the same thing that all quarterbacks struggle with.

For the second time in the last three games, the Gator defense recorded five or more sacks. Jachai Polite, who was named SEC Player of the week recorded the first multi-sack game of his career. Vosean Joseph and CJ Henderson also contributed.

Mullen said he thinks the Gators are different than other teams defensively.

Kate Venezio is a fourth-year telecommunication-news student at the University of Florida. Kate does it all: Behind the camera she captures emotional moments as a photographer for the University of Florida Athletic Association. She's comfortable being in front of the camera, too. Kate interviews players, coaches, fans and family members for pre- and post-game coverage as a beat reporter for ESPN Gainesville/WRUF-FM. In addition, Kate produces the sports segment for the weekly WUFT News program. There, she's responsible for writing the script in its entirety to include production commands. The presentation includes video highlights and interviews taped and edited, and Kate then live anchors the final package on a daily deadline. In addition, she writes stories for wruf.com where she informs sports fans of local, state, and national trending topics. Kate also utilizes social media as a tool to help get the stories in front of viewers.
@@kate_venezio
Previous Buccaneers Limp into Bye Week
Next Kansas City Chiefs Stay Unbeaten After Win Over Broncos