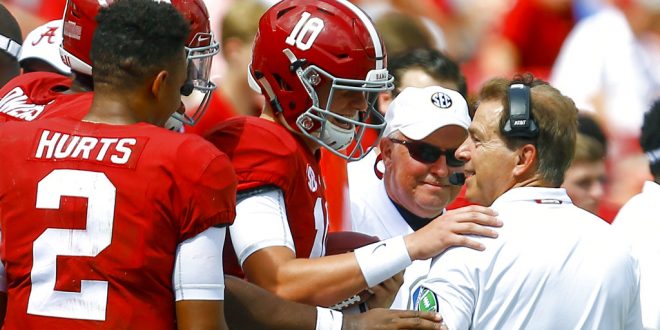 The undefeated Alabama Crimson Tide heads to Donald W. Reynolds Razorback Stadium to take on the Arkansas Razorbacks. Alabama dominated the Louisiana-Lafayette Ragin’ Cajuns 56-14 last week to remain No. 1 in the AP poll. On the other hand, the Razorbacks dropped their fourth-straight game in a 24-17 loss versus Texas A&M, remaining winless in SEC play. Alabama has won 18 of 29 all-time meetings versus Arkansas and is undefeated in 10 under Head Coach Nick Saban.

The nation’s fifth-best total offense returns to the field after Nick Saban rotated his quarterbacks once again. Heisman-hopeful Tua Tagavailoa, former starter Jalen Hurts and freshman Mac Jones all played, combining for 360 total yards and completing 13 of 16 pass attempts. Hurts, who could have easily transferred from the program, played his fifth game. Therefore, Hurts is now unable to redshirt this season, showing his loyalty to the program. However, Hurts is scheduled to graduate in December and will still have another season of eligibility.
With the Hog secondary struggling, Tagavailoa may continue to be the most efficient passer in the nation. The sophomore is yet to throw an interception this year and the Alabama defense is second (tied with South Alabama) in the nation in interceptions at 9. With Arkansas throwing a nation-leading 10 picks this season, the Crimson Tide are 35-point favorites.
Despite Arkansas record, Saban said his team has a lot of respect for Arkansas and how they’ve improved.

Arkansas opened the season with an expected 55-20 win versus Eastern Illinois. Since then, the Razorbacks are 0-4 with two tough losses versus North Texas and then No. 8 Auburn. First-year Arkansas Head Coach Chad Morris believes his team has been better than the results so far this season after the loss to the Aggies.

“This is a better football team than we’ve been all year,” Chad Morris said.

The Razorbacks strong running game is helping the offense. On offense, running backs Devwah Whaley and Rakeem Boyd are averaging 164 yards per game. At the same time, the rush defense has allowed only 353 yards through five games.

The inconsistencies link to the passing game. Arkansas is still not set on a starting quarterback, with Ty Storey and Cole Kelley combining for six touchdowns and seven interceptions. The pass rush is also struggling, with the Razorbacks giving up 1,034 yards in the air to opponents so far.

Kickoff is set for noon on Oct. 6.

Sports Journalist @ESPNGainesville, @VAVEL, @VAVEL_USA, @WUFTNews. Telecom at @UF. Miami Aficionado. Views are my own. RT's ≠ endorsements.
Previous Lightning and Panthers Face Off in NHL Season Opener
Next Tim Tebow to be Inducted in the Ring of Honor