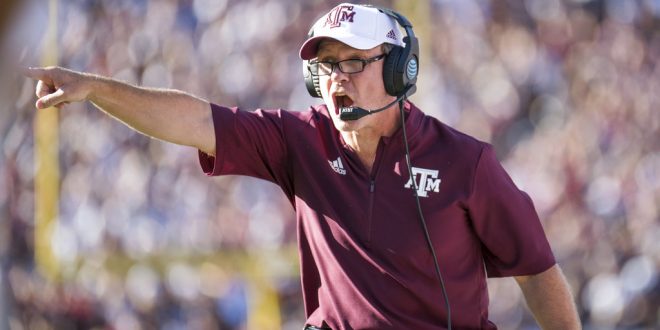 The No. 17 Texas A&M Aggies enter the bye week with a 5-2 record and three-straight SEC wins. Despite sporting one of the hardest schedules in the FBS, Texas A&M already has played No. 3 Clemson, No. 1 Alabama, No. 14 Kentucky and a South Carolina team dropped from the rankings in Week 3. The wins against an up-and-coming Kentucky squad (big wins versus No. 14 Florida and No. 22 Mississippi State) and the subpar Gamecocks may not be impressive compared to other ranked teams.

However, a two-point loss to the Clemson Tigers, dominating wins versus NW ST and LA-Monroe and a one-touchdown win versus Arkansas shows promise heading into the final five games of the season. With games versus Mississippi State, Auburn, Ole Miss and LSU remaining, the Aggies still have a lot to prove.

College Station: A Station With a Path to Improvement

After three seasons of losing five to six games at the end of the Kevin Sumlin years, Texas A&M is looking for a path upwards. After losing three-straight bowl games from 2015-2017, the Aggies hope to reach the level of Sumlin’s first two seasons—two bowl wins and a combined record of 20-6— and more. All in all, the Aggies are trending upwards, jumping from outside the AP poll to No. 17. In fact, some of the Aggies players are standing out nationally. Tight end Jace Sternberger leads the NCAA in yards (496) and touchdowns (6) for his position. Additionally, he’s been named an honorable mention for the John Mackey Award recognizing the most outstanding tight end in college football. Punter Mann Braden is also the NCAA leader in average punt and net punting. Crazy enough, he also leads the NCAA in forced fumbles by a punter.

Head Coach Jimbo Fisher said the team is trying to continue improving after a great win on the road:

Texas A&M is the only team in FBS that has produced 80+ first downs in both categories.#GigEm pic.twitter.com/OSf748AUFK

Fisher left a Florida State football program that he won 83 of 106 games within eight years to join Texas A&M. Interestingly, Fisher’s first season in College Station has begun with the same win percentage as his bowl game history with the Seminoles (5-2). With the backing of the fans and the university, Fisher is translating the sublime facilities and recruiting of Texas A&M to wins on the football field.

However, the season can still take a turn for the worst, especially when the SEC West team hasn’t become eligible for a bowl game yet. This season’s schedule is the second-hardest of Fisher’s head coaching career, with only 2016 surpassing his first season in the SEC. That Florida State team finished 10-3, winning a 33-32 nail-biter in the Orange Bowl versus Michigan.

The Aggies return to the field Oct. 27 in a road game versus No. 22 Mississippi State at 7 p.m. on ESPN.