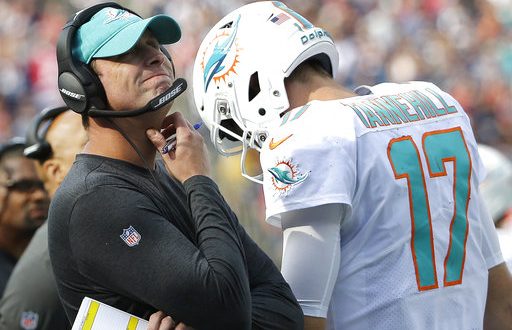 Miami Dolphins head coach Adam Gase, left, watches from the sideline as quarterback Ryan Tannehill walks past him to the bench during the second half of an NFL football game against the New England Patriots, Sunday, Sept. 30, 2018, in Foxborough, Mass. (AP Photo/Steven Senne)

It’s past the halfway point in the season and the struggling Miami Dolphins are fading out of the playoff picture. It’s difficult to point fingers at who on the Miami sideline needs to make an improvement. However, it’s clear that an adjustment needs to be made at the quarterback position.

The Dolphins have two experienced quarterbacks that haven’t been able to consistently execute. Ryan Tannehill was a first-round quarterback that brought high hopes to the Miami fan base. Brock Osweiler was the quarterback who was supposed to succeed Peyton Manning.

Neither has lived up to the expectations that were set for them, but both are struggling to get Miami to the postseason.

Tannehill began his career with the Dolphins in 2012 when he was selected 8th overall in the NFL Draft. Since then, Tannehill has posted one winning season and zero playoff starts. 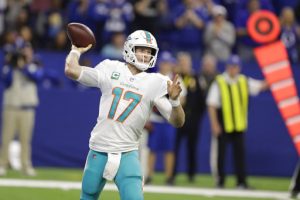 The Dolphins had a promising start to the season before Tannehill’s Week 5 injury, throwing for seven touchdowns and nearly 700 yards. After beginning the season 3-0, Miami lost back to back games.

Tannehill suffered a right shoulder injury in Week 5 against the Cincinnati Bengals.

After returning from his injury, Tannehill was named the starter for Miami in their Week 12 matchup against the Indianapolis Colts.

Osweiler had expectations of becoming the successor of Peyton Manning and the Denver Broncos. Since then, Osweiler has bounced around the league starting for the teams such as the Houston Texans and Cleveland Browns before landing in Miami.

Despite starting 25 games in his first six seasons, Osweiler signed with the Dolphins in March of 2018. Osweiler became a free agent after the Browns released him in 2017.

After losing Tannehill in Week 5, the Dolphins turned to Brock Osweiler. During Osweiler’s reign as starting quarterback, he went 2-4 and threw for over 1,200 yards and six touchdowns.

We have signed quarterback Brock Osweiler.

Osweiler intends to keep competing for the starting quarterback position.

For now, the Dolphins are sticking with Tannehill as their starting quarterback in a crucial AFC East division matchup against the Buffalo Bills this Sunday. 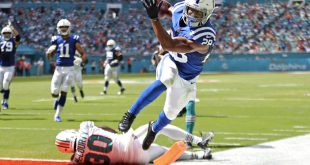 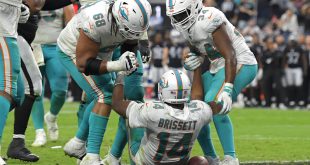