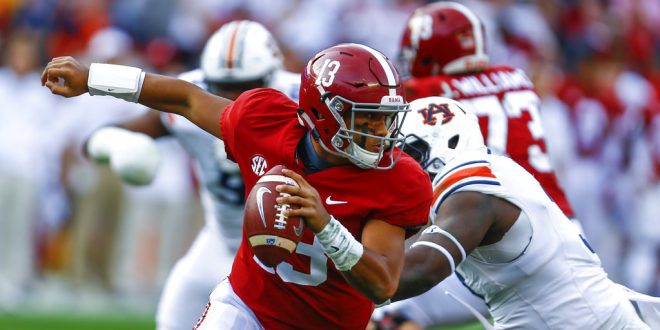 The Unstoppable Force: Alabama Goes 12-0 in the Regular Season

The Alabama Crimson Tide have been a force to be reckoned with in recent years. The team has won five national titles since 2009 under the tutelage of head coach Nick Saban.

This season, the Tide have been even more impressive, adding a lethal offense to the equation to go along with its stifling defense.

The team will almost certainly compete in its fifth-consecutive College Football Playoff, pending a win over Georgia in the SEC Championship Game.

Tide QB Tua Tagovailoa has taken the college football world by storm in 2018, bringing the Tide’s average offense to the next level.

It was obvious after what Tagovailoa showed in the national championship game last season that he’d be the starter coming into the year.

Tagovailoa is considered the Heisman frontrunner at the moment, and if you take a look at his stats in 2018, you’ll understand why.

The Hawaii native has been tremendous this season, battling through knee problems to lead Bama to an undefeated record. Through the air, Tua has gone 189/269 for 3,189 yards. He’s thrown an impressive 36 touchdown passes so far in to go along with just two interceptions. Tua can be lethal on his feet as well. The sophomore quarterback gained 211 yards on the ground, rushing for five touchdowns.

Saban spoke about Tua’s play against Auburn as well as the entire year so far:

The Crimson Tide will compete against the Georgia Bulldogs on Saturday in the SEC Championship Game to solidify their spot in the College Football Playoff.

Through 12 games this season, the Tide have yet to be truly challenged. They’ve won each game by at least 20 points.

The Bulldogs figure to give Bama the toughest time before the the Tide’s potential trip to the College Football Playoff. UGA is 11-1, and figure to be ranked fourth in the new CFP rankings when they’re released this evening.

Alabama is favored and is expected to win. However, if Jake Fromm and Georgia can put up some points against Bama’s defense that hasn’t been as stout this season compared to others, you could see a game similar to the one that took place in the ATL, just last January.