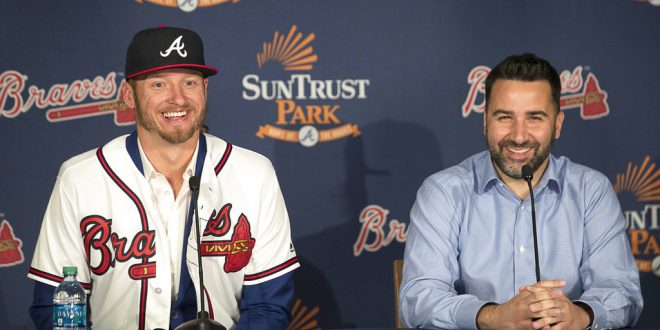 Josh Donaldson Signs with the Braves

Which Donaldson will Atlanta Get?

The 2015 American League MVP is coming off an injury-marred season where he only played in 52 games. By far his lowest total since his rookie year in 2015. With his health in doubt, Toronto dealt Donaldson to Cleveland where he provided a spark for the Indians. In 16 games he clubbed 3 and hit .280 showing signs he is healthy once again.

If healthy, there is no doubt Donaldson is a big addition to the Braves lineup. From 2014-2017, Donaldson accounted for a total of 140 home runs, made three all-star teams, won two silver slugger awards, and won the 2015 American League MVP.

Here are the numbers the former AL MVP has put up over the past 4 seasons. pic.twitter.com/sbPIyOxAwy

The signing was announced right after the nostalgic return of catch Brian McCann. Although, not from the Atlanta area, the Donaldson signing has a homecoming feeling of sorts. Donaldson is from Pensacola, Florida and later attended Auburn University. As a kid, Donaldson remembers being a Braves fan.

“My very first favorite player was Ron Gant. It’s been very full circle, from going to my first Braves game when I was 12 to now 32 being able to wear this jersey and wear it with pride,” Donaldson said.

After a painful rebuilding process, Braves fans can finally close that chapter. Last season the Braves made a surprise run at the division title and the Donaldson move proves they are ready to compete.

Pretty nice to hear the #Braves' GM officially declare the rebuild is over. Those were Alex Anthopoulos' closing remarks. 2018 was progress, but adding a Josh Donaldson to a playoff caliber club is certainly another big indicator: The goal is win, win, win and win some more.

And the Braves are ready to win. According to Donaldson, that’s why he decided the come to Atlanta.

“You look at the talent and the age groups of some of the guys we have here, and the ability they have,” Donaldson said. “For me it’s not just about making myself better, I’m here to try and make everybody grow.”

Donaldson joins a young and talented core in Atlanta. He joins Ronald Acuna (20), Ozzie Albies (21), Johan Camargo (25), Dansby Swanson (25), and Freddie Freeman (29). With his 23-million contract, Donaldson will occupy third-base daily for Atlanta. This moves last year’s third baseman, Johan Camargo into a utility role. Third base prospect, Austin Riley, remains with the Braves for now and will get opportunities in the outfield during Spring Training.

For now, the Donaldson addition gives the Braves a formidable lineup heading into the 2019 season.