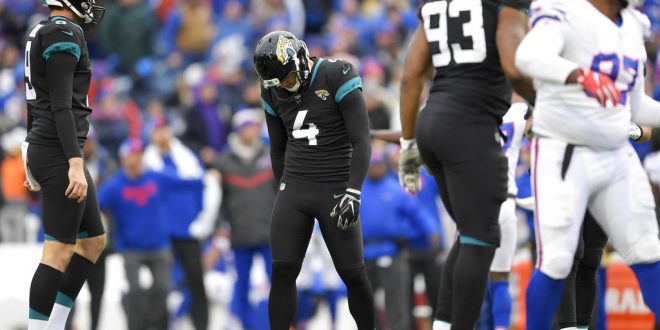 Jacksonville Jaguars kicker Josh Lambo (4) reacts after missing a field goal against the Buffalo Bills during the second half of an NFL football game, Sunday, Nov. 25, 2018, in Orchard Park, N.Y. (AP Photo/Adrian Kraus)

What’s Wrong With the Jacksonville Jaguars? A Seasonal Turnaround

The Jacksonville Jaguars are an almost-touchdown underdog at home heading into their Week 13 matchup versus the Indianapolis Colts. Last season, the Duval County team were 7-4 heading into the Colts matchup. Now, Blake Bortles hits the bench as quarterback Cody Kessler will lead the lackluster Jags offense with quarterbacks coach Scott Milanovich now calling the plays.

With a record of 3-8, pride is the one thing we're still playing for. pic.twitter.com/SUaTsj8maw

Jacksonville sits at the bottom of the AFC South, while the division-leading Houston Texans have won eight straight games. Jags Head Coach Doug Marrone is looking to end the seven-game skid, putting his trust into Kessler instead of former third pick Bortles. Kessler lost all eight starts with the Cleveland Browns in 2016, however, the Jags offense ranks 22nd in total offense.

Despite Marrone’s defense ranking fifth in total defense, the offense is only scoring 17.9 points per game. Additionally, running back Leonard Fournette’s injury and disciplinary issues haven’t helped, only appearing in five games this season.

All in all, the team is not consistently playing or communicating well. The Jaguars lead the NFL in passes dropped at 26. The next worst? The Cincinnati Bengals with 20. Furthermore, Bortles’s decision-making under center is a big factor in the 22 turnovers Jacksonville has given up. The defense also has had communication issues, resulting in less big plays and ranking 31st in tackles (636).

The Jaguars face a tough test if they hope to start a magical run back to .500. The Indianapolis Colts are riding the play of quarterback Andrew Luck and big games from tight end Eric Ebron and wide receiver T.Y. Hilton. Although the Colts are 6-5, Luck has led the team to five consecutive wins, beating the Miami Dolphins 27-24 last week. With that, Marrone’s team looks to hopefully put smiles on the faces of Jags fans once again with a big win.

Marrone said it’s on him to hit the U-turn in #DUUUVAL.

On the other hand, vocal cornerback Jalen Ramsey is listed as questionable heading into Week 13. The former Florida State player said the team is playing for their pride after the 24-21 loss to Buffalo.

The Jags would love some luck to help their pride heading into Sunday. Kickoff is set for 1:00 p.m.