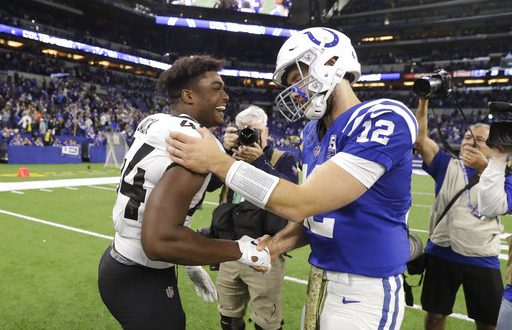 The Indianapolis Colts are gunning for a win to boost their ranking in the AFC South. The Jacksonville Jaguars desperately want to break their losing streak. A rematch game in Jacksonville will reveal the destiny of both of these teams.

Less than a month ago, the Jaguars felt the wrath of the Colts, narrowly losing 29-26. This loss essentially put the nail in the coffin for their postseason dreams. Facing the Colts again will give the Jags a chance to find a sliver of redemption within their season.

This time last year, the Jaguars were preparing to play in the AFC Championship game, as they were at the top of their division. Unfortunately, a seven-game losing streak has put them in the bottom of the division and in a scramble to change their game plan.

QB Blake Bortles has been benched due to a wrist injury, bringing in back up QB Cody Kessler.

Kessler has played in one game this season (vs. Houston, lost 7-20), going 21-30 for 156 yards and one touchdown. He will have to face the Colts defense without lead RB Leonard Fournette, following his ejection from last week’s game because of fighting. These setbacks accompany the firing of Jags offensive coordinator Nathaniel Hackett. He has been replaced by the QB coach Scott Milanovich. All these changes have definitely stacked the odds against the Jags, but hopefully, their efforts to adjust will pay off.

The Colts have had quite a turn-around in their season, winning their past five games after losing four in a row earlier in the season. They currently sit 2nd in the AFC South, behind the Texans. If they want a secure spot in the playoffs, winning their remaining games is crucial.

Because they have defeated the Jaguars once already this season, the changes on the Jaguars side should not worry about the team.

QB Andrew Luck has been doing very well this season, throwing at least three touchdowns in the past eight games. This momentum should carry the Colts offense into another win this week.

The ESPN NFL Matchup Predictor predicts that the Colts have a 57.3% chance of defeating the Jags. Playing away from Lucas Oil Stadium may shake them up, but the team is excited about a road division game.

The Colts head to Jacksonville to face the Jaguars on Dec. 2 at 1 p.m. ET. You can watch the game on CBS.

3rd-year Telecommunications student at the University of Florida. Also a member of the Women's Track and Field team.
Previous Vikings Visit Patriots in NFC-AFC Showdown
Next Dolphins look to bounce back at home against the Bills