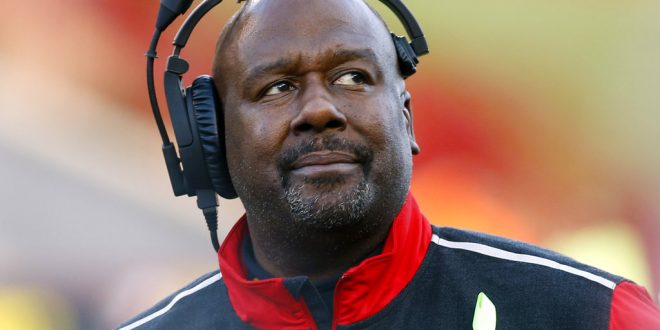 People outside the DMV won’t get it, but people from there absolutely will. Especially his former Terp players. Unrivaled local respect among local HS coaches, he can help heal & unite the factions like no other. Welcome home, Lox

Rolling with the Crimson Tide

Locksley’s offense ranks seventh in total offense, with the passing offense ranking the same and the rushing offense sitting at 36. His quarterback, Tua Tagovailoa, is one of three finalists for this season’s Heisman Trophy.

Locksley’s coaching experience dates back to 1992. Since then, the Washington D.C. native has coached at Towson, Naval Academy Preparatory School, University of the Pacific, Army, etc.

The Broyles Award winner has been at Maryland before. His first stint was as running backs coach from 1997 to 2002. Additionally, he was the Terps’ offensive coordinator from 2012 to 2015, earning him a spot as interim head coach after Randy Edsall was fired. Locksley finished 1-5, leaving in 2016 to become an offensive analyst at Alabama.

Furthermore, Alabama Head Coach Nick Saban said he is one of the best recruiters he’s ever had. Although recruiting and his offense can lift Maryland up in the Big Ten, does his past head coaching experience say different?

Locksley coached New Mexico for three seasons, only winning one game in 16 and serving a one-game suspension for punching an assistant coach.

Despite the past, many Maryland high school coaches are happy with his appointment.

A source close to Martin McNair, father of fallen #Terps lineman Jordan McNair, said he's thrilled with the Mike Locksley hire. Knows him well — Locksley recruited his son at Bama — and will likely voice support for the choice.

Work Left to Do

Locksley has a chance to win a BCS National Championship if the Crimson Tide beat Oklahoma in the Orange Bowl. The winner of the Orange Bowl will face either Clemson or Notre Dame on Jan. 7 at Levi’s Stadium in Santa Clara, California.