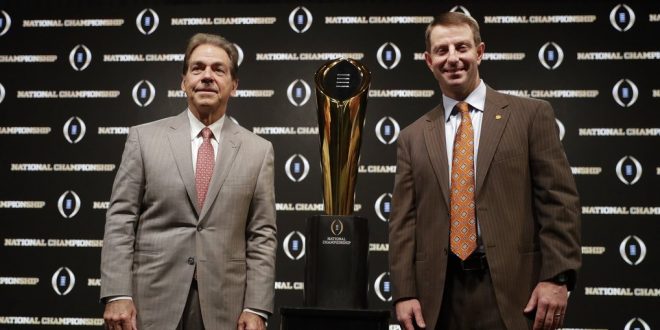 The Battle of the Elite

The Tide and the Tigers have been stellar over the last few years, but particularly this year. They are both 14-0 this season and have barely been tested by any of their opponents thus far. Since 2015, Alabama is 55-3. However, Clemson is not far behind at 54-4.

Alabama’s star quarterback Tua Tagovailoa has 3,671 yards and 41 touchdowns this season. The star quarterback bolsters the Tide offense to arguably the bests it has been in the last decade. Speaking of quarterbacks, the Tigers have a star of their own in Trevor Lawrence. The freshman QB has thrown for nearly 3,000 yards with 27 touchdowns.

The teams met just last year in the Sugar Bowl. Alabama won that matchup 24-6. It was clear that Clemson just wasn’t up to Alabama’s par, but this year that has changed as the two teams meet in a battle of the best: No.1 and No. 2.

Even with Clemson’s clear improvements since last season, Alabama is also even better on offense. Not to mention Jalen Hurts is ready and waiting if Head Coach Nick Saban may need him.

The previous two Championship showdowns between Alabama and Clemson have been decided by just five and four points. If that is any indication of what’s to come, this year’s game could be even closer.

Each team will certainly be hoping to continue adding to their respective trophy cases. Alabama is expecting its third in the last four years, while Clemson is looking to add their second in last three years.

This matchup may have become all too predictable to us as viewers, but the ever so common teams are more eager than ever to face off and determine who will claim the ultimate prize this season.

The Battle in the Bay Area…@AlabamaFTBL x @ClemsonFB #NationalChampionship pic.twitter.com/e7FPXqLwcG