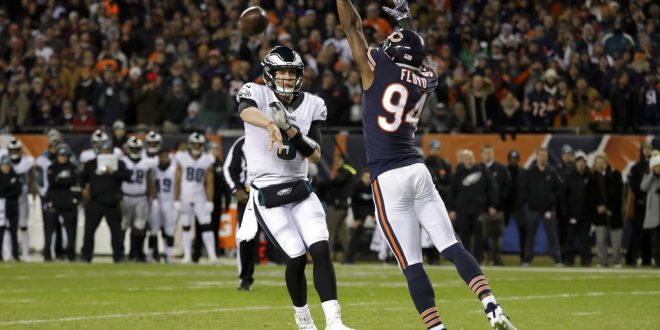 The Dallas Cowboys defense stepped up in the first half as they held Russell Wilson and the Seahawk’s offense to six points. Wilson was able to get more offense in the second half and almost pulled off a comeback but just came up short, losing 24-22. Dak Prescott threw for 226 yards, a touchdown and ran for 29 yards.

Out of the Cowboys 164 rushing yards, Ezekiel Elliott ran for 137 of them on 26 carries. After a slow first quarter in which he carried seven times for just 26 yards – Elliott took off and set up every other aspect of the Cowboys’ attack. He ran for 44 yards at halftime, which led to the Cowboys’ only touchdown of the first half on an 11-yard pass from Prescott to Michael Gallup.

The Cowboys will go up against Jared Goff and the No.2 seed LA Rams next Saturday at 8:15 p.m.

Nick Foles and the defending champs were able to overcome the Chicago Bears’ top defense in the league. The Bears were only leading 6-3 at halftime as each team was struggling to score. The final score of the game was 16-15, but it was the ending of the game that shocked the viewers. Chicago Bears kicker, Cody Parkey, could have sealed the game with 10 seconds left but he missed a 43-yard field goal attempt. The kick hit the left upright and off the crossbar.

Nick Foles and the Eagles offense couldn’t get much going the whole game until the final minute of the game.  Foles completed a 2-yard touchdown pass to Golden Tate on fourth down with 56 seconds remaining. Foles found another way to come out victorious in close playoff games dating back to last season’s playoffs.

Philadelphia will next play the No.1 seed New Orleans Saints next Sunday at 4:40 p.m. Foles and the Eagles will have a very difficult path if they want to repeat as Super Bowl Champions. The last sixth seed to win the NFL title was Green Bay in the 2010 season.