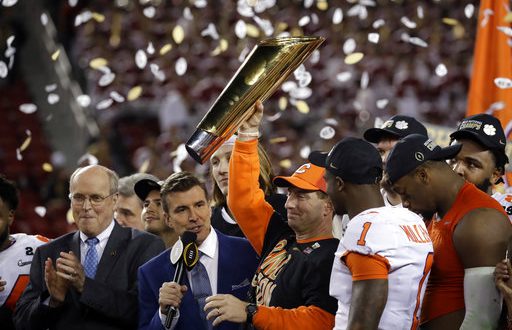 In the two previous championship showdowns, Clemson and Alabama went down to the final seconds. In the third meeting, it wasn’t even close.

Clemson steamrolled Alabama to claim their third national title in school history. This is also the second championship in three seasons for the Tigers and head coach Dabo Swinney. With the win, Clemson became the first team to go 15-0 since 1897.

Clemson set the tone for the game by intercepting Alabama quarterback Tua Tagovailoa on the Tide’s opening possession. Corner back A.J. Terrell took a bad throw by Tagovailoa 44-yards to the house to give the Tigers the early 7-0 lead.

AJ Terrell gave Clemson a 7-0 lead on this pick-six pic.twitter.com/3NUEGK90ns

The lead wouldn’t last long as the Tide quickly answered with a touchdown drive capped off with a Tagovailoa 62-yard touchdown pass to wide receiver Jerry Jeudy to tie the game up.

Clemson would answer just as quickly with a 17-yard touchdown run from running back Travis Etienne to give Clemson the lead back.

Alabama drove right down the field and scored on a play action roll out, which fooled the entire Clemson defense, touchdown pass from Tagovailoa to tight end Hale Hentges. On the ensuing PAT, kicker Joseph Bulovas missed it, keeping Clemson in front 14-13.

Another. Touchdown.
but the kicker hits the upright!

He redeemed himself by hitting a 25-yard field goal to start the second quarter and give the Tide a slight 16-14 advantage. Even with this redemption, things started to go south for Alabama.

Clemson responded by marching down the field and pounding it in the end zone with Etienne from one yard out to give the Tigers a 21-16 lead.

Then, Tagovailoa threw his second interception of the night, this time by cornerback Trayvon Mullen. Mullen flipped the field by returning it 46-yards to the Alabama 47. This turnover led to Etienne’s third touchdown on the night, this time being a five-yard pass from Lawrence. This extended Clemson’s lead to 28-16. They added a field goal to end the half leading 31-16.

The tide turned for the Crimson Tide seemingly for good on the team’s first drive in the second half.

Down 31-16, Alabama was forced into a fourth down situation at their own 22-yard line. They seemingly opted to go for the field goal to try and make it a 12-point game. However, they decided to go for a fake field goal with the holder, quarterback Mac Jones, trying to run for the first. He was stuffed at the line of scrimmage by defensive tackle Nyles Pinckney.

Clemson would take the possession and deliver the finishing blow. Lawrence connected with Justyn Ross for a 74-yard touchdown pass to put Clemson up 37-16.

This was the moment when it seemed as if Alabama was done and the game was over.

The Tigers would score again after stopping the Tide on downs. Lawrence threw his third touchdown pass of the night to wide receiver Tee Higgins from five yards out, extending the score to 44-16. This would be the final score.

The 28-point defeat is the worst loss by a Nick Saban coached Alabama team.

Saban put the blame on himself for his team’s performance.

Three games into the 2018 season, Swinney made a crucial decision not many coaches in his position would do. He decided to bench quarterback Kelly Bryant, who led the team to the College Football Playoff the year before, in favor of a true freshman, Trevor Lawrence. It was certainly a gamble to put the season in the hands of an unproven signal caller. However, it paid off in a major way.

Lawrence took over the offense without skipping a beat. He actually made the offense seemingly unstoppable. This dominance was on full display Monday night against one of the top units in college football. Lawrence had all day to throw against Alabama’s acclaimed defense. The Tide only sent four games on blitzes and dropped the rest into coverage. Saban said post game it was the game plan they decided to go with. Lawrence picked them a part. He finished the game with 347 yards passing and three touchdowns.

The true freshman won offensive player of the game honors. With the win, he became the second quarterback, the first since 1985, to start and win a national title as a true freshman.

Lawrence said the win means everything to him.

Start of a Dynasty?

There might be a new dynasty brewing in college football. Clemson’s national title win Monday night is the team’s second in three years. They have been in the title game three of the last four season. Head coach Dabo Swinney has his team locked and loaded for another national championship run last year.

Even with their recent success, they have been often overshadowed by the powerhouse of Alabama. All season, the attention was on Alabama possibly having the best team ever. It certainly was considered by many as Saban’s best Alabama team. Not many people were putting Clemson into the conversation.

With what Clemson did in the title game and the season as a whole, Swinney believes his team should now be in the conversation.