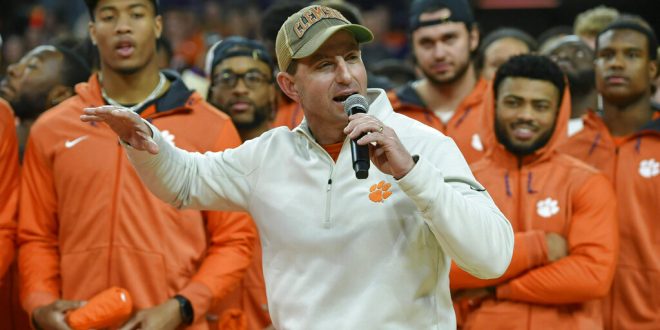 National Signing Day: Winners from Around the Nation

Any prominent high school football player with an offer from a college will consider National signing day the most important day of their young lives. Some players committed back in December, however, yesterday marked the official day where we can see where teams rankings finished in terms of recruitment.

Here’s the breakdown of most winners of the 2019 recruitment class:

Saban once again secured the bag with his recruiting tactics as he ended ahead of the pack in first place. 27 commits overall that include Antonio Alfano, Trey Sanders, and Kevin Neal, three five-star prospects. Every other signee is no less than a four-star recruit. Many speculated that Alabama would’ve fallen off the rankings due to two recruits flipping their commitment in the last minute. However, it didn’t even knock them off their throne.

Dabo Sweeney is coming off a successful national championship run this past season. However, he barely made it inside the top-10 standard for recruiting rankings. Not a single five-star recruit fled to South Carolina, however with their already stacked team with young studs like Trevor Lawrence and Xavier Thomas.

Sweeney’s best commit was Frank Ladson, a four-star recruit out of Homestead, FL. He’s the fifth best wide receiver in the state. Ladson is one out of 12 wide receivers that will enter Clemson’s squad next season.

The Tigers lost a ton of seniors that it had coach Sweeney concerned. However, his past trophies have helped his resume building and provided many recruits to be a part of South Carolina’s most successful college program in recent years.

Tyler Davis was a huge pickup for Clemson as they were short on defensive tackles.

The Longhorns had a successful recruiting season as they finished third overall. 24 recruits have committed to Texas, including two five-star recruits. Bru McCoy and Jordan Whittington are two spectacular athletes. McCoy is the second best player but first in his position in the state of California. He’s ranked 9th nationally as an ATH.

Whittington is also an ATH, however, he’s sixth in the state and 2nd in his position.

Overall, the Longhorns look great overall with these young players coming into the 2019 season. 10 have already enrolled in the university, alongside 14 players who have signed their letter of intent.

The Sooners acquired some high-quality players, however, they were short on four-star recruits. 13 overall four-stars make up their 2019 roster, with key offensive players like wide receiver Trejan Bridges and tight end Austin Stogner. Flip to the defense and they’re studs include safety Jamal Morris OLB Jonathan Perkins.

Lincoln Riley is completely infatuated with his five-star recruits. Wide receivers Jadon Haselwood and Theo Wease alongside quarterback Spencer Rattler headline this offensive forefront. With the Sooners losing quarterback Kyler Murray to the NFL draft, Riley had to push strongly towards a new quarterback position.

“They’re certainly talented to come in and make a difference,” Riley said. “We had five players alone just on offense declare early for the NFL Draft in addition to our seniors. There are certainly going to be opportunities for those guys. I think they saw that. I think that was a big reason why they saw Oklahoma as such a great opportunity,” accoridng to 247 sports.

Recent grad from the University of Florida. Editing all articles on here while helping out the newbies. Love all things basketball.
@@MarcoJMartinez_
Previous Naz Reid Leads No. 21 LSU to overtime win versus Mississippi State
Next SEC does well on Signing Day