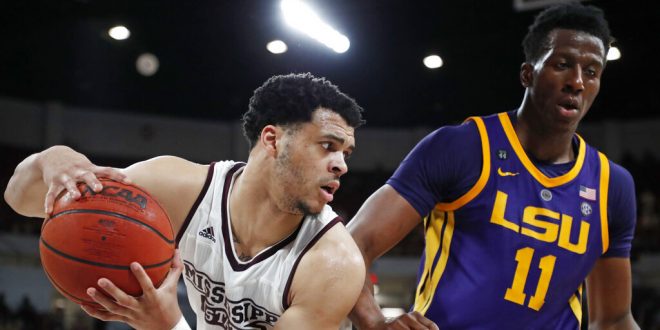 The Mississippi Bulldogs can keep their free corn dogs, as the No. 21 LSU Tigers had the last laugh Wednesday night.

No. 21 @LSUBasketball gets a huge road W in StarkVegas. pic.twitter.com/7GtbBw2mkk

LSU (18-4, 8-1 SEC) has won all three SEC overtime road games so far this season (Arkansas, Missouri and Mississippi State). Additionally, the team has won five straight games on the road. Despite a tough 90-89 loss to Arkansas on Saturday night and another slow start, the Tigers are edging closer to an NCAA Tournament bid in March.

Like the Tigers frequent slow starts, Reid produced only four points in the first half. However, the forward scored 25 points in the second half and overtime, with six of those points in the final minute. His biggest shot came from an angle three that bounced in with the shot clock expiring and under 13 seconds to play. Reid said he has been practicing shooting.

Head Coach Will Wade said his team was “a lot more solid down the stretch” compared to the final minutes versus Arkansas. Wade gave credit to Mississippi State for making it difficult to win.

“No, we played better. The first half, we just turned the ball over too much. Only having four turnovers in the second half helped us. We had two really good days of practice. I felt like we were going to play well tonight.  We didn’t even play as well as we practiced. I thought we practiced pretty well, and I thought we were going to come out and play well. It’s tough when you play a team like Mississippi State. We could play our best game and still get beat. It makes it tough, but we were able to scratch it out tonight.”

Mississippi State (16-6, 4-5 SEC) threw away the game despite Quinndary Weatherspoon scoring 27 points on 11-of-17 shooting and Reggie Perry finishing with 19 points and 10 rebounds. The Bulldogs led by as many as 10 in the second half.

Mississippi State Head Coach Ben Howland said he takes responsibility for the loss because he “didn’t do a good enough job” managing minutes.

“Getting enough minutes for Tyson [Carter] and Robert [Woodard II] in the second half. It really hurt us as the game wore on. So, it fully starts right here with me. I didn’t do as good of a job as I needed to.”

That was LSU's fourth Quad 1 win of the season.

18-4 overall. 8-1 in the SEC halfway through. Number 19 in the NET Rankings (possibly higher by morning).

The makings of a really nice tournament resume, with plenty of work left to do.

LSU returns to the Pete Maravich Assembly Center to face Auburn on Saturday, Feb. 9. The Auburn Tigers have won three straight, beating Missouri, Alabama and Florida by 69 points. On the other hand, Mississippi State battles No. 5 Kentucky in a noon home game Saturday.