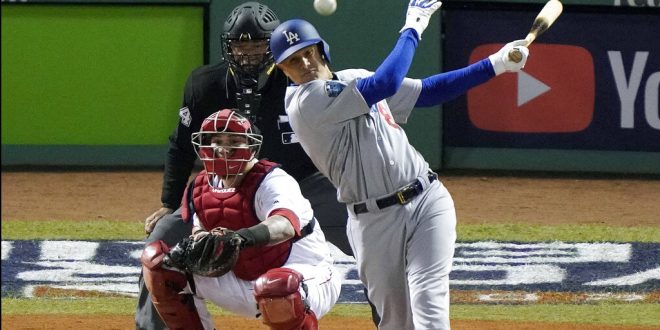 FILE - In this Oct. 24, 2018, file photo, Los Angeles Dodgers' Manny Machado, right, hits a single in front of Boston Red Sox catcher Christian Vazquez during the fourth inning in Game 2 of the World Series baseball game in Boston. Machado, Bryce Harper, Craig Kimbrel and Dallas Keuchel will not be around when the bat and ball bags are opened at spring training throughout Florida and Arizona this week. They are among the dozens of free agents still looking for jobs. (AP Photo/Elise Amendola, File)

Baseball is Back: MLB Spring Training Opens this Week

For the first time since early November, the MLB is back.

With pitchers and catchers reporting this week, spring training officially marks the return of baseball.

The Boston Red Sox enter the 2019 season as the defending World Series champions and will be aiming to repeat.

However, no team has repeated as MLB champions since the New York Yankees went back-to-back-to-back from 1998 to 2000. They have a tough AL East ahead of them yet again with teams like the Yankees and the Rays, who each won 90+ games last year.

The bullpen was thin even when Boston beat Los Angeles in November, and that’ll be the big question mark going into the season as well. However, the Red Sox still return the core that led them to glory last season.

J.D. Martinez and the Killer B’s of (Mookie) Betts, (Andrew) Benintendi, (Xander) Bogaerts, and (Jackie) Bradley Jr. make Boston one of the favorites yet again.

No Machado or Harper Yet; No Kyler Murray At All

Manny Machado and Bryce Harper won’t know where they’ll report to yet, as they currently don’t even have a team. Despite being the two biggest free agents on the market, Machado and Harper have not yet signed and there aren’t any major hints as to where they’ll play next.

Machado and Harper aren’t the only high profile players without a team, as Craig Kimbrel and Dallas Kuechel also remain unsigned. It does feel like that those two big bats are two dominos that need to fall for other players to sign as well.

The issue is that time is running out for them to sign and be with a team for the whole spring, putting pressure on teams that want to have them for a full spring training.

Numerous teams have been speculated as suitors, with the Padres and Phillies being linked with both players. In terms of Vegas odds, the Giants are the favorite to land Harper. The Yankees are the favorites to land Machad0.

Meanwhile, the A’s have missed out on a key player they thought would be joining their team. Despite using a top-10 pick on him, Kyler Murray will be going to the NFL. Murray released a statement on his decision today.

Following a season in which he won the Heisman and is positioned to be a first round pick in the NFL Draft, the allure of being an NFL quarterback was too much for Murray to pass up. This, in spite of the fact that he was previously committed to baseball. Murray said as much after Oakland allowed him to return to Oklahoma for one season of football.

It remains to be seen what this decision means for the future of dual-sport athletes that get drafted by MLB teams.