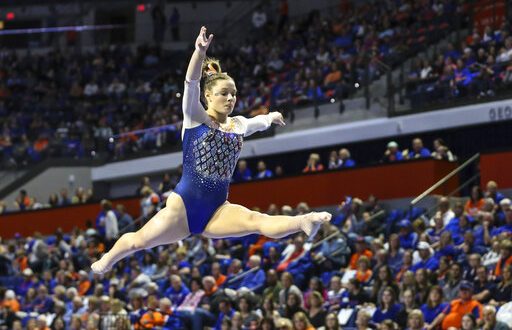 After defeating No. 12 Auburn on the road last Friday night, coach Jenny Rowland was proud of the direction the Florida Gators Gymnastics team has taken after falling in a devasting 198.025-198.325 loss to No. 1 Oklahoma.

Rowland hopes to see her team continue climbing when it takes on No. 9 Alabama in another top ten road match on Friday night at 8:30 p.m.

Rowland expects a hostile environment in Tuscaloosa against Alabama. The Crimson Tide hold the series lead over the Gators at 29-24-2 dating back to the 2002 NCAA National Championships.

It’ll be no easy task for Florida, though, who’ll have to face the likes of Alabama’s Lexi Graber and Ariana Guerra. Graber currently holds the Crimson Tide’s best all-around score with 39.40, while Guerra was named SEC Specialist Gymnast of the Week alongside Florida’s Rachel Gowey on Jan. 22.

The Gators are coming off it’s 13th annual “Link to Pink” event where both teams dress in pink to support the fight against breast cancer. These meets are part of an initiative started by the SEC. The Gators will be facing its originator in Alabama in the 15th annual Power to Pink meet on Friday.

Florida gymnasts, such as freshman Savannah Schoenherr, were honored to be part of the event.

“It’s amazing to compete for such a great cause and know we’re competing for something more,” Schoenherr said following the Link to Pink event.

Both teams have a history in having competitive squads. Friday’s matchup marks the 56th time Alabama and Florida have faced off ranked in the top-10 since 2002. Rowland knows the history of the Crimson Tide’s program and has reminded her team that they must perform at its finest if it’s to walk away with a victory in Tuscaloosa.

Florida faces a difficult task on the road though, as neither team has been able to steal a victory from the home squad in dual meet action since 2003.

The Florida Gators have excelled on the beam this season with the performance capitalizing opportunities for the Gators in most meets.

The Gators had a perfect six-for-six beam set against Auburn last week with a dominant 9.9 performance from Alicia Boren, Gowey and Alyssa Baumann.

Rowland was asked about her take on the beam team. She discussed how important the group’s command is to the rest of Florida.

Previous No. 1 Volunteers Burning Up the SEC
Next Area Girls Basketball Teams Competing in Regional Quarterfinals on Thursday