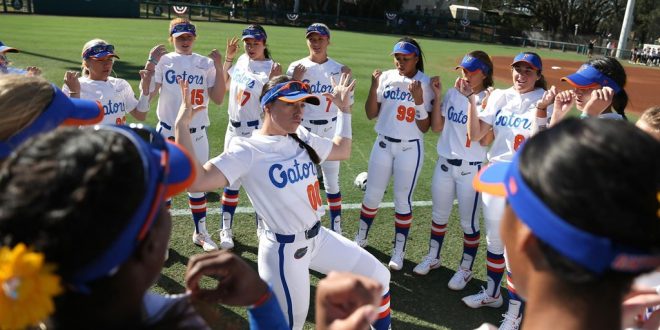 Gators Get Set for Littlewood Classic

The fourth ranked Florida Gators will take their undefeated record into Tempe, Arizona for the Littlewood Classic.

What’s on the schedule

The Gators will play their first game today at 4 p.m. against Illinois State. Florida opened the season against the Redbirds with a score of 15-0 in the opening weekend. The Gators will then take on the tournament hosts No. 14 Arizona State Sundevils at 9 p.m.

Rounding out the weekend schedule for the Gators are games against San Diego, Utah State and Central Michigan. They are set for Saturday at 1:30 and 6:30 and Sunday at 11 a.m., respectively.

Florida heads out west as the only undefeated team in the tournament. They’re back on the road after an exhibition match against Japan and game against North Florida where the renovations of the stadium were revealed.

Who to watch out for

Registered four wins and a save as @GatorsSB collected five wins on opening weekend. @kkatlyn111 is the #SECSB Pitcher of the Week. pic.twitter.com/WOrBJngZuT

Her performance in the opening weekend got the Gators the start they were looking for to open the season. The Georgia native pitched to an outstanding 26 strikeouts with a 0.74 ERA over 19 innings.

Another player to keep an eye on is senior outfielder Amanda Lorenz who, along with Barnhill, was named to the Preseason All-SEC team. Lorenz is just six walks away from tying former Gator star Kayli Kvistad’s career walks record. She has four on the season and had three alone in her game against North Florida.

The Gators will look to stay undefeated in an unfamiliar environment out west, but still have the talent to come back home with an unblemished record.

Previous No. 4 Gators Softball Head to Arizona for the Littlewood Classic
Next Girls High School Basketball and Soccer Teams Advance In Playoffs