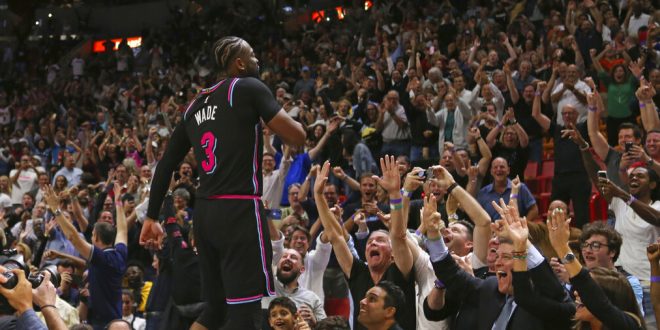 Miami Heat guard Dwyane Wade (3) reacts after hitting a 3-pointer at the buzzer against the Golden State Warriors in an NBA basketball game Wednesday, Feb. 27, 2019, in Miami. (David Santiago/Miami Herald via AP)

Miami Heat fans have seen it before.

The Magic City team was up big, but let the game slip away late in the second half. Golden State Warriors center Demarcus Cousins sealed the deal with free throws in the final 5.4 seconds to cap a 19-point comeback and win 120-118 on Feb. 10.

Dwyane Wade and some roster changes — Heat center Hassan Whiteside (strained hip) and Cousins (rest) did not play — did not let that happen again Wednesday night.

The future Hall of Famer hit his first buzzer beater ever with his team trailing to give Miami a 126-125 win at American Airlines Arena. He blew his first attempt, but got the ball back and threw up a hail-mary-three as time expired. Similarly, the Heat gave up a 64-40 second-quarter lead with 3:16 left, but Wade’s two late three-pointers were the difference.

Wade’s shot resulted in a trembling AAA like when Ray Allen hit the corner three in Game 6 of the 2013 NBA Finals. This time, it was his doing and his teammates let him know it before and after he jumped onto the courtside table.

“I told Steph [Curry], ‘I needed this one on my way out. Y’all get enough,’” Wade said. “But it was cool. I think the one thing cool for me was I’ve got younger teammates that heard about some of the things you do but don’t always get an opportunity to see it.”

Warriors head coach Steve Kerr had no doubt about his shot.

“Dwyane just hit an unbelievable shot,” Warriors coach Steve Kerr said. “It was going in as soon as it left his hand.”

Dwyane Wade and Goran Dragic combined for 52 points (17-28 FG) off the bench to power Miami past the star-studded starting lineup of Golden State. Wade, who has never been known for his three-point shooting, shot 5-for-8. Dragic had a career day, scoring 25 of his points in the first half — 20 points in the second quarter. The former all-star point guard ended the game perfect from the free throw line (9-9) and only played 21 minutes.

Despite not having Whiteside, Bam Adebayo’s 32-minute double-double (11 pts, 10 reb) and Kelly Olynyk (15 pts, 5 reb) filled the gap. Josh Richardson and Justise Winslow combined for 31 points and their defense held up. The Heat also made 80 percent of its free throws (24-for-30).

Miami is right back in action, playing James Harden and the Houston Rockets at the Toyota Center in Houston Thursday night. The Heat won the first meeting 101-99 at home on Dec. 20. 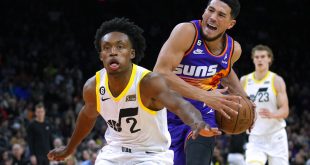